Starting today, Zero1 will be pre-registering customers on its website for the $19-a-month plan that will be launched next month.

This price is for the first 3,000 registrations. After that, it will cost $29.99 a month. The plan comes with 200 minutes of local talk time and 200 SMS messages. Even at the higher price, it is one-third the current market price.

Zero1 is the third virtual mobile telco to enter Singapore after Circles.Life and Zero Mobile. Virtual telcos do not build their own physical mobile networks, but lease them wholesale from one of the existing telcos. Zero1 leases from Singtel.

Zero1's CEO Stuart Tan said the low price requires it to manage the surfing speed of heavy users in a way that will not slow down that of other users on the network.

Specifically, the download speed for high-definition videos will be capped after the first 3GB of data allowance is used.

This limit, Mr Tan claims, will not reduce the speed of many other services including YouTube, Facebook and WhatsApp calls.

Zero1 hopes to sign up 50,000 subscribers - about 1 per cent of the post-paid market - in its first year of operation. It plans to set itself apart from rivals by offering free voice roaming via its Zero1 app, slated to be launched in June. With the app, subscribers will be able to call and receive calls from any Singapore mobile or landline number for free while roaming overseas.

This is done using call-forwarding technology Mr Tan developed, patented and launched early last year. The technology is embedded in a device called Qongle, sold for $199. It helps travellers avoid expensive roaming fees, ranging from 35 cents to $6 a minute depending on the destination country, or inconvenient workarounds to reduce roaming rates such as buying a SIM card in the destination country. 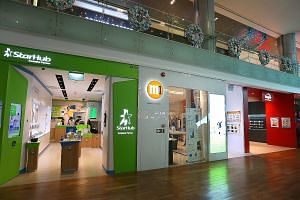 Unlimited mobile data: It's back but can it replace home Internet?

Qongle's technology is now embedded in Zero1's backend systems. Mobile data roaming rates will apply but the rates will be announced later.

In June, the firm will also launch tiered data plans and value-added services such as music and live concert streaming on virtual reality platforms.

Zero1, which received its operating licence from the Infocomm Media Development Authority late last year, has raised a few million dollars from private investors. They include Zone Telecom, a telephony and networking services firm that belongs to the Hong Kong-listed e-Kong Group conglomerate.

Other telcos' data plans and prices

Singtel offers unlimited mobile data for at least $108.80 a month, through an add-on called Data X Infinity to a basic plan.

Those who subscribe to the Data X Infinity scheme canshare their data with up to three family members through a supplementary plan, which costs $10.70 a month for each line.

Since late 2015, Singtel has offered unlimited mobile data on Sundays for customers under its Singtel Circle benefits programme. This requires users to subscribe to its mobile plans as well as fibre broadband and pay TV services.

StarHub does not have a plan that offers unlimited mobile data every day. Unlimited use of mobile data is available only on weekends for mobile plans that start at $24 a month for 3GB of mobile data. Its SharePlus programme - at $9.63 a month - allows the bundled data and talk time to be shared with a supplementary line.