SINGAPORE - Drone-flying has become a popular, even mainstream activity here in Singapore.

And as the holiday season draws closer, more flyers are taking to the skies with their new toys, as drones become cheaper and easier to fly.

But these flying machines can be dangerous if mishandled or poor controlled. Local drone pilots urge responsible flying, with a focus on safety first.

Before you send your new toys whizzing into the skies, here are a few things to take note of.

Recreational drone-flying without a permit is allowed in Singapore, as long as drone pilots keep to certain regulations.

The Civil Aviation Authority of Singapore (CAAS), which manages regulations for unmanned aerial flights here, has an accessible and comprehensive list of dos and dont's on their website.

Drone flyers have to keep in mind these regulations before they fly their drones:

- The total weight of their drone, including a payload (such as a camera) must be 7kg or below.

- Drones are not allowed to discharge any material, such as water or other substances.

- Drones cannot fly within 5km of an aerodrome or airbase, or within restricted, dangerous, protected or prohibited areas.

Permits are required for commercial use of drones, such as paid photography, or if the requirements exceed what were mentioned above. 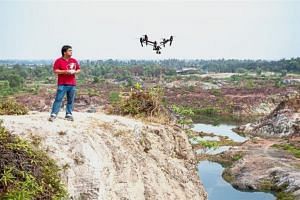 Pilots can apply for permits here.

Drone pilots should also follow general safe flying habits. They should fly in good visibility and weather conditions, and keep the drone within sight at all times, the CAAS said.

Users are also advised not to fly over crowds or areas where they may interfere with emergency or moving vehicles.

Due to these regulations, flying space in Singapore is relatively restricted, but it is still possible to find great flying locations.

For the most updated database on where you can go to fly drones, flyers can check the OneMap website.

Go to the "nearby" tab and click on Safety and Security. There, you can check off areas within 5km of an aerodrome, or dangerous, prohibited and restricted places. The areas not within the circles are good to go for drone-flying.

It is best to fly in large, open spaces without trees, such as fields in places like Marina South or Old Holland Road.

However, under NParks guidelines, drones are not allowed to be flown in the parks and nature reserves the agency oversees, such as the Botanic Gardens and East Coast Park.

Sorry east-siders, but most of eastern part of Singapore is ruled out due to the proximity to Changi Airport and Paya Lebar Air Base.

The Marina Barrage is a popular option for drone flyers, which offers good photography options, such as of the city skyline.

Bukit Timah is another area great for scenic, nature shots that is within acceptable flying zones.

A number of drone enthusiasts are also taking their drones overseas to capture stunning aerial photos of nature and landscapes. Drone laws differ from country to country, so do your research before heading there. Some countries require all drone operators to have a permit, which can be applied for online.

Places popular with drone photographers within the immediate region include Bali, the Philippines and Hong Kong.

Most countries in South-East Asia follow regulations similar to Singapore, but some are more extreme. Thailand, for example, has very strict drone laws, such as requiring all drones with cameras to be registered, or the Philippines, which requires all drone operators to submit an application and get a permit before flying their gadgets.

Make sure to get a proper, sturdy carrying case to protect your drone and all other equipment. Pack all drone batteries on your carry-on luggage and also factor in extra time in airports for security checks, as drones and equipment may raise questions.

Thinking of getting into the drone-flying hobby? Amateur flyers who want to experience sending a drone whizzing up into the sky can jump into the hobby at a relatively low price. But those looking to do drone photography will have to cough up a little bit more.

Here are some drones in different price points to get you started: