Samsung Pay will be rolled out here before the end of June.

At launch, those holding Visa and MasterCard credit or debit cards issued by DBS/POSB, OCBC and Standard Chartered banks will be able to use a compatible Samsung phone to pay at almost all retail outlets that accept credit cards.

Singapore will be the fourth country to have Samsung Pay. It was launched in South Korea last August, followed by the US in September. Last month, Samsung Pay made its debut in China.

Mr Koh said Singapore is one of the first countries to have the service because he sees it as a very important country and a "test bed for new technologies".

"If you do not make it a success in Singapore, I would not expect another great success in South-east Asia, or other markets," he said. 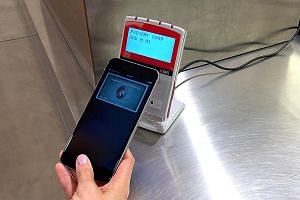 Four Samsung Galaxy smartphones - the S6 edge+, Note 5, S7 and S7 edge - are compatible with Samsung Pay at launch. Fingerprint authentication is required for each transaction.

"You will be able to use the Singapore Samsung Pay service almost anywhere in the world where Visa and MasterCard cards are accepted," said Mr Chris Tarr, regional director of Samsung Pay in South- east Asia and Oceania.

Around six million credit and debit cards issued here can be used with Samsung Pay.

As of February, Samsung Pay has over five million registered users and recorded more than US$500 million (S$672 million) worth of transactions globally.

Mr Jasni Ismail, who owns a small business and uses the Samsung Galaxy Note 5 smartphone, said he plans to sign up for the service when it becomes available.

"Having everything in one device is something I am looking forward to," said the 55-year-old. "Initially, I was worried about security issues, but I think having the fingerprint sensor helped ease my fears."

A version of this article appeared in the print edition of The Straits Times on April 20, 2016, with the headline 'Samsung Pay to be rolled out this quarter'. Subscribe
Topics:
More
Whatsapp Linkedin FB Messenger Telegram Reddit WeChat Pinterest Print Purchase Article Copy permalink