It is September again - that time of the year when Apple releases new iPhones. But, on this occasion, the 10th-anniversary iPhone X will be launched only in November. The new iPhone 8 and 8 Plus will be available on Friday.

Apple decided to do away with the "S" suffix for this new generation of iPhones. Instead of being named iPhone 7s and 7s Plus, they are called iPhone 8 and 8 Plus.

They are no longer the flagship models but the second top models of the iPhone series, just behind the iPhone X, but above the iPhone 7, 6s and SE models that are still selling.

The iPhone 8 and 8 Plus look almost similar to the previous three generations of the phones. However, both now feature a glass back.

Instead of the five colours previously, the iPhone 8 and 8 Plus now come in three - silver, space grey and gold. We reviewed the silver iPhone 8 and the gold iPhone 8 Plus. The new gold model has a nice pinkish shade to it. So, for those who prefer pink, the gold version is the one to get. Regardless of colour, both the iPhone 8 and iPhone 8 Plus have a great premium feel with the glass back.

This glass back is supposed to be the most durable glass ever in a smartphone and has an oleophobic coating that lets you easily wipe off smudges and fingerprints, according to Apple.

I am not sure about its durability, but I do find it does not smudge as much as other glass-back smartphones I have handled before.

With the glass back, though, the iPhone 8 and 8 Plus are actually 0.2mm thicker than their respective predecessors. I found that Apple's iPhone 7 and 7 Plus cases still work with the iPhone 8 and iPhone 8 Plus.

Unless you are in Europe, all those unsightly CE rear markings found on previous iPhones are gone from the new series. Instead, it is one smooth piece of glass with only the Apple logo and iPhone wording.

The glass back comes with an embedded charging system that supports wireless charging.

While their exteriors might look similar, the innards of both the iPhone 8 models are vastly improved, compared with their iPhone 7 predecessors.

At the same time, it blew the competition away, as the Samsung Galaxy Note8 scored 6,564 (multi- core) points. Even a Dell XPS 13 9360's Intel i7-7660U processor scored only 9,259 (multi-core) points, so you are getting better-than-laptop performance on these new iPhone models.

The performance improvement means graphics-intensive games, such as Implosion, Warhammer 40K: Freeblade and Infinity Blade 3, play without any lag. The graphics texture and the fluidity in these games are as smooth as silk.

Both iPhone 8 and iPhone 8 Plus are designed with augmented reality (AR) in mind.

I tried a few AR games, such as The Machines (beta), Warhammer 40K: Freeblade and Thomas & Friends Minis.

Although still in beta, The Machines looks the most promising. You control mechs and other units in an attempt to destroy the enemy's base. You have to move your whole body (and the phone) in order to aim the reticle to attack the enemies and structures. You also need to move the phone forward into the virtual battleground to zoom in to see your units in action.

Another interesting AR app is the Sky Guide. You just hold the phone to the sky to find the constellations, planets and satellites. It was interesting to know that what you thought was just another star is actually the planet Venus.

Although the image sensor stays at 12 megapixels like its predecessors, both iPhones use an all-new faster image sensor.

Slow Sync flash combines a slow shutter speed with a short burst of strobe. This is particularly useful in low-lighting conditions when you want a bright subject in the foreground against a properly exposed background.

Whether in bright sunlight or dim lighting conditions, photos taken using iPhone 8 and 8 Plus exhibit sharper details than those taken with the iPhone 7 Plus.

You can change the options in post-processing as well.

For Natural Light, your subject's face is in sharp focus against a blurred background, which is similar to the original Portrait mode. The Studio Light gives your subject's face a brighter and pleasing look, while the Contour Light provides dramatic shadows that can look a tad fake.

The Stage Light is supposed to have your subject's face lit against a dark background. Stage Light Mono achieves a similar effect but in monochrome.

But these two Stage Light modes need some serious tweaking. Very often, you can clearly see edges of the face that reveal the background or the "dark paint" seeping into the face of the subject. They just look unnatural. Hopefully, Apple can correct its Stage Light algorithm.

As usual, I looped a 720p video at full brightness, full volume, and with Wi-Fi on, to stress-test the new iPhones' batteries. 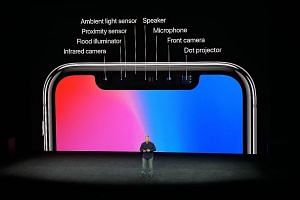 The iPhone 8 lasted 6hr 40min, while the iPhone 8 Plus lasted 40min longer. Both figures are around 50min less than what I got respectively from the iPhone 7 and 7 Plus.

But battery life differs depending on usage. Under normal use, which includes regularly checking Facebook and Instagram updates, as well as WhatsApp and Telegram messages, both phones can last a full working day.

• Verdict: The Apple iPhone 8 and 8 Plus represent incremental upgrades from its predecessors. But the significantly faster processor and the better cameras are great reasons to upgrade, especially if you are still holding on to the iPhone 6s. However, both iPhone 8 models will have the shadow of iPhone X looming over them. So should you get the iPhone 8 or 8 Plus, or wait for the X? It depends on whether you still prefer a home button and want to save several hundred bucks. If so, you should go for iPhone 8 or 8 Plus. But if you want something really new (like me), you might want to wait for the iPhone X.