This sets the V20 up as a premium phone for hardcore users, and it certainly delivers. Its 5.7-inch screen allows it to fill, quite dominantly, the phablet space left empty by the Samsung Note 7. It is packed with features that cover the range of multimedia entertainement. I enjoyed the four hi-fi digital-to-analog converters in the V20, which boosts audio quality of music playback. The phone also supports lossless music formats like FLAC and DSD.

Surprisingly, the camera falters in low-light conditions, with noticeable grain even in indoor lighting. It can be mitigated somewhat by switching to manual mode and taking full control of shutter speed and ISO, but those who wants an automatic camera experience may find low-light pictures to be lacking. 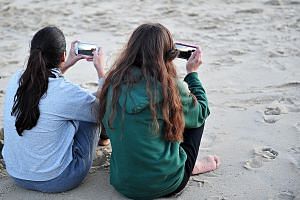 The V20 runs the Android 7.0 Nougat operating system right off the shelf. LG has hidden the app drawer by default, but it can be restored with some tweaks to the settings to make it feel almost like stock Android.

The local version is relatively free of the bloatware that plagues the South Korean and American versions of the phone.

Performance is blazingly fast, with the phone being able to keep up with whatever I could throw at it.

The V20's large screen is gorgeous and perfect watching videos while on-the-go, with great colours and sharpness. On the top right of the phone is LG's famous secondary screen, first seen on the V10, which functions as an always-on display that shows notifications and alerts when the screen is locked.

When unlocked, it acts like a shortcut bar to turn on things like the flashlight or Wi-Fi. The more I used it, the more the convenience and ease of use grew on me.

The V20 is matched by a respectable 3,200mAh battery. I could make it through the day on a single charge while using the phone as a music player through the day.

•Verdict: The V20 is a stellar flagship for anyone in the market for a feature-packed phablet.