In a livestreamed video, a departure from last year's Paris launch event for the P30 due to the coronavirus pandemic, Mr Richard Yu, the CEO of Huawei's consumer business group, said of the phones: "We will move mobile photography to a new height."

In Singapore, the P40 Pro is priced at $1,448 while the P40 goes for $1,048. Both  models (in gold, silver or blue) will be available from Apr 4 via local telcos, consumer electronics stores and online platforms Lazada and Shopee, but consumers can pre-order them from now till  Apr 3.

Like last year's P30, the P40 has three cameras on the back but the wide-angle unit is better than the P30's 40-megapixel (MP) one. This means the P40's camera can pick up more details in photos than last year's model.

Finally, the new P40 Pro+ model ramps up the photography capabilities of the phone even more with a rear five-camera system that boasts 10x optical zoom, which outstrips the 5x optical zoom for last year's P30 Pro and many other flagship phones.

All three P40 models also feature a 32MP hole-punch front-facing camera for selfies but only the larger P40 Pro and P40 Pro+ phones come with an additional front-facing depth-sensing camera for better bokeh effects which create out-of-focus backgrounds in photos.

The P40 Pro and P40 Pro+ also have super narrow bezels and their displays have a fast refresh rate of up to 90Hz, compared with 60Hz for last year's phones, which means videos on the screens will appear smoother.

All three P40 handsets also feature fingerprint sensors built within the screens that Huawei said are able to scan fingerprints and unlock the phones 30 per cent faster than last year's models. 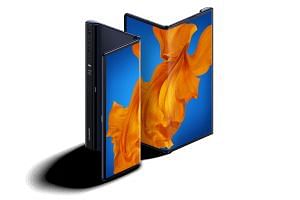 The P40 and P40 Pro will be available in three glossy glass finishes of white, blue and black, as well as two matte glass finishes of gold and silver. The P40 Pro+ will come in ceramic back finishes in two colours - black and white.

Due to the continued ban of Huawei arising from the United States-China trade war, the P40 series will not feature Google Mobile Services such as the Google Play store and Google Maps, despite running on Android 10.

Instead, Huawei is touting its own app store, the AppGallery. Launched in March 2018, the AppGallery is available in more than 140 regions, including Singapore. With more than 390 million monthly users worldwide, Huawei claims it is the third-largest app store in the world.