ST Digital takes a look at five top-of-the-line smartphone models, putting them through rigorous tests and comparing the whizz-bangs trotted out by phone makers to woo those willing to fork out the moolah

As 2017 comes to an end, the major smartphone flagship releases are coming to a close as well.

The flagships feature the latest bells and whistles in smartphone technology, with top-end specs and cutting-edge design.

The most noticeable trend of this year is probably the bezel-less look, with flagships sporting edge-to-edge displays with as minimal borders as possible.

This is also the year of dual rear-cameras, be it secondary wide-angle lenses for landscape shots, or telephoto lenses for portrait shots.

The Straits Times Digital team has picked out what we like - and what we do not - about five of this year's top flagship smartphones: Apple's iPhone X, Google's Pixel 2 XL, Huawei's Mate 10 Pro, LG's V30+ and Samsung's Galaxy Note8.

These phones are priced at a premium, and will set users back above $1,000 without contract. They were also selected based on specs, design and performance. The selected phones, save for the LG V30+, were also previously reviewed by us. 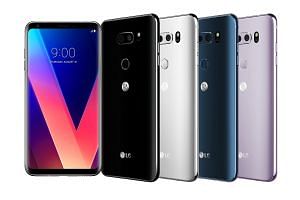 Each phone's battery life was put to the test using a continuous video-loop with the phone's display brightness and volume turned up to the maximum, and with WiFi and Bluetooth switched on.

And as is customary, we tested the phones' horsepower using GeekBench 4, an app that strains the phone's processor through a variety of stress tests.

A higher score generally correlates to better and smoother performance in cases such as multi-tasking or running intensive gaming apps.

• Large 4,000mAh battery lasts a day of usage with plenty to spare.

• Huawei's EMUI user interface has useful features, such as multiple instances of a single app for different users and a desktop mode when connected to external monitor.

• Preloaded with tons of proprietary apps.

• Camera excels at taking both images and videos.

• Three years of Android software and security updates compared with one to two years for other Android phones.

• Oled screen has blueish tint when viewed even slightly off-centre.

• S-Pen makes taking down quick notes and sketches not only convenient, but also fun.

• Its 6GB RAM handles everything a power user can throw at it, with little slowdown in performance.

• Samsung's attempt into artificial intelligence, Bixby, isn't quite up to scratch yet and takes up a button on your phone that is prone to accidental presses.

•The Note8's $1,398 price tag makes it one of the most expensive phones on the market.

• Comes pre-loaded with a bunch of Samsung apps which users might not want to use.

• Animoji, or animated emoji, is fun.

• Most expensive flagship smartphone in the market.

• Need to re-learn gestures to operate the phone.

• The "notch", or black area on top of iPhone X's screen, might irk some.

Flagship specs at a glance