Amid the hype over the iPhone X, with its bezel-less screen and Face ID authentication feature, the fact that it supports wireless charging has probably gone under the radar.

This feature is also in the iPhone 8 and 8 Plus that were launched last Friday.

The iPhone X will be available in November.

It does not help that Apple is late to wireless charging - no, adding the feature to previous iPhones by using a wireless charging case does not count. But the good news for iPhone users is that Apple has chosen the widely supported Qi wireless standard, instead of going with proprietary technology. In other words, households with a mix of Apple and Android devices, like the Samsung Galaxy S8 and Note8, can share the same wireless charger.

Wireless charging works by electromagnetic induction. Simply place the iPhone on the charging pad. It will charge through most phone cases, except for metallic ones. 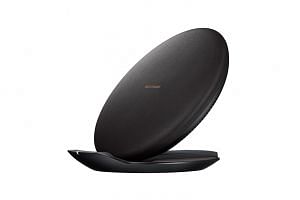 While convenient, wireless charging is generally slower than using a cable. Take care to place the iPhone properly on the charging pad as it will not charge if it is poorly positioned. Check if it is charging from the iPhone's screen or from an LED indicator on the wireless charger.

Apple will launch its own AirPower wireless charger sometime next year. It has a wider body that can charge up to three devices at the same time. But, in the mean time, there is no shortage of third-party Qi wireless chargers available. In fact, they come in all forms, such as being integrated in the base of monitors like the new Asus Designo Curve MX34VQ or the base of the HP Envy Curved 34 All-in-One computer.