Samsung's new Galaxy Note 10 and its larger variant Galaxy Note 10+ are the South Korean company's first flagship phones to do away with the headphone jack, marking the end of an era.

This was unveiled at the Galaxy Unpacked 2019 event yesterday (this morning in Singapore) in New York, where the Note 10 premium phone series was debuted to thousands of attendees from around the world.

While the tech giant had already removed the 3.5mm jack from its mid-range A8s device late last year, getting rid of it now for the latest Note device, which is much more mainstream, truly signals the death of the headphone jack.

Mr Eric Chou, director of product for Samsung Australia's mobile division, hinted at the firm's desire to deliver better phone designs when asked about the reason for getting rid of the headphone jack. "The Galaxy Note 10 is the epitome of meaningful design with purpose - cutting-edge performance and power equipped in a slim and sleek design," he said in an interview.

The Galaxy Note 10 boasts an extremely slim bezel with a screen-to-body ratio of 94 per cent, among the highest in the industry.

Its iconic stylus pen, or the S Pen, has also been upgraded to be able to do new tasks, such as converting air gestures to various tasks on their phone screens. For example, users standing away from their phones can use the S Pen like a remote control, rotating it in the air clockwise to zoom out of the screen when taking pictures, and waving it in the opposite direction to zoom in.

Ever since Apple first made the controversial decision to remove the headphone jack for the iPhone 7 in 2016 - with other major smartphone makers such as Google and Huawei doing the same later - Samsung has always proudly maintained how it was one of the last to retain the audio port.

Singaporean graphic designer Mandy Ow said she has always preferred devices with the headphone jack, so that she can listen to music while charging her phone at the same time. The 27-year-old, who has a Samsung Galaxy S9, said: "When I make phone calls using my wired earphones, the sound and call quality is consistent. If I switch to my Bluetooth wireless earphones, the sound can be a bit unstable." 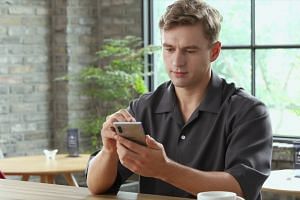 Tech review: All-screen Samsung Galaxy A80 comes at a price

US formalises ban on government contracts to China's Huawei, others

Tech review: Xiaomi Mi 9T is excellent for its price

Despite the rise of wireless earphones in recent years, some traditional audiophiles prefer having wired earphones, as they do not need to be charged for power.

Other users who insist on using their wired earphones with their mobile devices, even without a headphone jack, are also annoyed about having to purchase additional dongles so that the earphones can be adapted for the phone.

Mr Parv Sharma, a research analyst for emerging technology, devices and ecosystems at Counterpoint Research, said that while "a large section of the smartphone user base is still not comfortable with the removal of the headphone jack, they may get used to it over time".

But he added that it made financial sense for companies to remove the jack, as they can then offer new accessories such as their own wireless earbuds and gain more revenue that way.

The Galaxy Note 10 and Note 10+ will be available later this year, with pricing to be confirmed.

They boast similar capabilities, except that the more expensive Note 10+ has a larger display screen of 6.8 inches, compared with the Note 10's 6.3 inches, as well as features such as a bigger battery, more memory and an additional camera.

Much like how the smartphone has replaced the compact camera for many amateur photographers, Samsung's new Galaxy Note 10 and Note 10+ phones may be the answer to the video camera for casual videographers, thanks to the devices' host of advanced video-shooting and editing features.

Photographers from The Straits Times will be using the newly launched Samsung Galaxy Note 10+ to capture the National Day Parade, in the first such collaboration between The Straits Times and Samsung. Catch the digital and print specials tomorrow and on Saturday.