Agencies cannot be totally dependent on, and hence at the mercy of, external consultants, he said, noting how attracting and retaining tech talent will propel Singapore's Smart Nation ambition.

Singapore wants talented IT professionals to consider joining the public sector. This is why the public sector has recently revamped its salary schemes to pay public officers competitively.

"If we are successful, we will be able to attract and recruit engineers of the calibre that companies like Google, Netflix, Dropbox, Slack and Go-Jek hire - whether fresh out of the university or already mid-career," said PM Lee. He was speaking at the inaugural Stack 2018 Developer Conference organised by the Government Technology Agency of Singapore (GovTech).

The public sector also needs its top leaders - including permanent secretaries and chief executive officers - to be tech savvy as they make the final decisions on IT projects.

"With senior engineering leaders and support from the top leadership, we can grow a strong engineering culture over time, and integrate the constellation of talent into a real IT capability," said PM Lee. He noted that this, in turn, will attract talented IT professionals into the public sector.

Singapore has made some progress on this front, starting with the formation of Hive, which opened in October 2015. 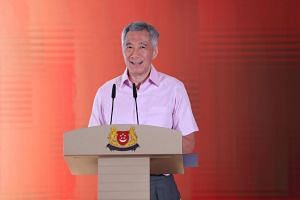 Lapses in IT systems, organisations must be fixed: PM Lee

The 13,000 sq ft facility at the Sandcrawler building in Fusionopolis has a serious mission: to bring back control of some IT functions previously outsourced.

It is the headquarters of a crack team of Singapore government data scientists and software engineers - close to 300 of them now.

"But we need many more, not just for GovTech, but also... many other places in the government," said PM Lee.

A survey by the Info-communications Media Development Authority of Singapore in 2015 estimated that 53,000 new jobs in areas such as data analytics, software engineering, cyber security and digital marketing will be created by this year.

The move is expected to go down well with engineers and technology buffs. Mr Duncan Hewett, senior vice-president and general manager of VMware in the region, said many engineers want to make an impact in the communities they live in. He added: "Government organisations present a great opportunity to make a larger social impact."

Correction note: This story has been edited for accuracy.