There will be a fundamental re-engineering of the Government so that it can tap technology to provide better and faster public services at a fraction of the cost.

This will involve radically overhauling or replacing its existing IT systems and revamping its processes.

It will move away from a system where individual agencies build their own e-citizen services and applications, to a more centra-lised approach that will enable such e-services to be created more efficiently.

The Government also plans a significant migration to cloud technology, without compromising on security.

Sharing his vision on how the Government's use of technology will improve the lives of Singaporeans in the future, Prime Minister Lee Hsien Loong said yesterday: "We will fundamentally transform how we develop government software and applications."

The key is to get government agencies working together and learning from one another, in-stead of each trying to reinvent the wheel.

"Instead of every agency building its own bespoke website, at great expense, and often repeating the same coding errors and bugs, we can do it more efficiently, and get better results, by reusing technologies," said PM Lee. 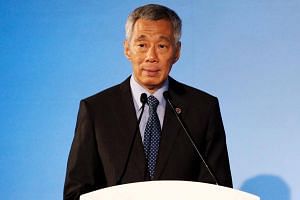 Lapses in IT systems, organisations must be fixed: PM Lee

Touching on this, Mr Chan Cheow Hoe, the Government's chief information officer and deputy chief executive of the Government Technology Agency of Singapore (GovTech), said: "Every agency is egocentric and wants to build its own thing and have its own vendor. This needs to change."

Both PM Lee and Mr Chan were speaking at the inaugural Stack 2018 Developer Conference organised by GovTech.

Under the new approach, a central system can be created instead of each agency having its own online licensing processes or Web forms. Forms can also be pre-filled with information so that users will not have to repeatedly give it to different agencies.

"With technology, we can go beyond tweaking existing ways of doing things to reduce bureaucracy and simplify our processes significantly," PM Lee said at the Suntec convention centre.

He mentioned a resale portal launched by the Housing Board that has halved the time it takes to buy and sell public housing flats as an example.

He said agencies would also be able to tap the Singapore Government Technology Stack - a suite of common software compo-nents used in application deve-lopment - to create e-services faster and cheaper.

At the same time, the Government is getting ready to put many of its systems and services on the cloud - instead of onsite - where they can operate round the clock, without the need for expensive dedicated backups.

"We have done a preliminary study and concluded that many government systems can, in prin-ciple, exist in the commercial cloud," he said.

The Government would have to design its own cloud for systems that could not be on the commercial one. And it would figure out how to operate systems that were so sensitive and critical that they must be isolated.

He said the recent data breach at SingHealth was a harsh reminder that cyberspace is not a benign environment. "We must continually strike the right balance between security and usability," said PM Lee.