SINGAPORE - An internship stint in Shenzhen, China, for four National University of Singapore (NUS) final-year students earlier this year led to an idea to make the world's first 7-in-1 USB-C hub with a solid-state drive (SSD) enclosure.

Their idea is now on the cusp of fruition.

Material science and engineering undergraduates Helen Tan and Karyn Chen, both 22; civil engineering student Fatim Mohrini, 22; and biomedical engineering student Aaron Ramzeen, 25, launched the Kickstarter crowdfunding campaign (kck.st/2M1XLvq) for their brainchild earlier this month. The campaign had raised more than $40,000 by last week, far exceeding their funding goal of $15,000, and is on track to launch next month.

The four undergraduates got to know one another only when they were in the NUS Overseas Colleges internship programme in Shenzhen. During their internship there, they came to know of Flujo Technology, a Singapore PC accessories maker based in Shenzhen.

"The idea of working on a project together was suggested by Flujo, since we were already in Shenzhen which expedites discussions," said Ms Tan.

After rounds of brainstorming sessions with Flujo's team, the four identified a gap between USB-C multi adaptors and SSD enclosures. And thus, the Flujo Signature Pro - which is a cross between the two - was born.

Collaborating with Flujo, they spent six months designing and refining prototypes before launching their Kickstarter campaign. 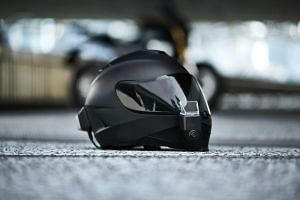 The Flujo Signature Pro is a sleek, thin rectangular slab of aluminium in space-grey finish. The package includes a USB-C cable, a mini screwdriver and screws for mounting an SSD, which is not included in the package.

With a footprint slightly smaller than an Apple iPhone XR and a thickness of 10.45mm, it easily fits into a jeans pocket.

Pledges start at $205 for one unit and accessories. The product's Kickstarter campaign will end on Nov 10.

I tried the Flujo Signature Pro on my Apple MacBook Pro and all the ports worked as advertised. Plus, I get additional storage from the SSD that fits into a bottom compartment, which supports the PCIe NVMe M.2 interface format.

It is quite ingenious to have this compartment, as it lets you upgrade your SSD storage whenever needed.

On one of the long sides, there is a USB-C Power Delivery port and a HDMI port that supports video output of 4K at 60Hz. Two USB 3.1 ports, a microSD card slot and a SD card slot are sited on the other long side.

Still, instead of potentially having to carry along several adapters and an external hard drive, you only need the Signature Pro.