The new MacBook Pro looks like an offspring of the old MacBook Pro and the newer 12-inch MacBook introduced last year.

Like the 12-inch MacBook, the new Pro has a metallic Apple logo on its lid. No more Apple glow. Lift the lid, and you find speaker grilles flanking the keyboard just like in the old MacBook Pro. 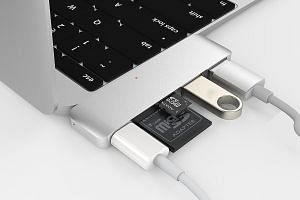 The speaker grilles are bigger on the 15-inch model compared with the 13-inch one. As a result, the sound quality is better with the bigger model, with more distinct mids and stronger bass. Even at maximum volume, I did not hear any crackling sound.

Both models use the second-generation butterfly mechanism - first found in the MacBook - for its keyboard, which is four times more stable than the scissor mechanism. The keys feel more responsive and have a better tactile feel than those of the MacBook.

The trackpad on the 15-inch Pro is twice as large as that of its predecessor, while the 13-inch Pro's trackpad is 46 per cent larger. This comes in handy when you need to move items across the screen.

The 15-inch Pro weighs 1.83kg and is 15.5 mm thick, which means it is thinner than the thickest part of the MacBook Air. A real candidate for MacBook Air upgraders.

The SD card slot, HDMI and USB 3.0 ports are history. In their place are four Thunderbolt 3 ports - two on either end of the laptop - that also support USB-C. What does remain, surprisingly, is the 3.5mm headphone jack, sited on the laptops' right.

However, Apple should have included a USB-C to USB-A adapter as part of the package.

This way, I can at least charge my iPhone 7 Plus with the laptop.

The omission of the SD card slot is the more irritating issue, though, especially for photographers and creative professionals who use the MacBook Pro for their work.

That said, this is not something that adapters cannot solve (see other story on this page).

The Touch Bar is a long Oled touchscreen, with a resolution of 2,170 x 60 pixels and displaying millions of colours, that sits above the keyboard. It replaces the row of F1-F12 function keys, Escape key and Power button.

The virtual Escape key lights up on the far left of the Touch Bar when the laptop is powered up. At the far right end is the Touch ID fingerprint reader. This is also the Power button. During set-up, you will be asked to enrol your fingerprint.

Once this is done, you will be able to unlock the laptop with Touch ID, just like with the iPhone, and also unlock locked Notes and confirm iTunes purchases.

By default, the Touch Bar will display the standard system controls, such as display brightness, keyboard backlight, media controls, system volume and Siri. But you can customise it to your liking.

The Touch Bar looks sharp and feels very responsive, whether you are tapping on a button or sliding on a brightness setting. You get the same number of icons on the Touch Bar, regardless of which model you choose.

Contextual commands will appear on the Touch Bar when you are using a supported app. The system controls will collapse to the right of the Touch Bar, with an arrow for you to expand them again.

All the native Apple apps, such as Mail, Safari and Photos, support the Touch Bar. In Mail, you get commands such as Archive, Move To and Flag.

I find the Touch Bar more useful in Photos. The thumbnail pane allows you to browse through the thumbnails by sliding your finger along the Touch Bar. You can also simply tap on the photo you want. In Safari, you can move between tabs using the same sliding action.

There are not many apps that support the Touch Bar right now. I tried two that do so - photo editor Pixelmator and deejay app djay Pro.

For Pixelmator, you get the various tools on the Touch Bar.

For example, you can adjust the size of the paint brush by sliding on the Touch Bar.

The djay Pro app lets you slice a track, apply filters and effects in real time when you are creating loops. It is quite fun to do all that on the Touch Bar. I think this is where the Touch Bar truly shines. Apple needs more killer apps like this.

With a faster processor and its discrete graphics processor, the 15-inch Pro feels zippier than the 13-inch Pro whether you are working on spreadsheets, editing photos or creating audio loops.

Playing of the action role-playing game Diablo III at its maximum resolution for each model is smooth with all graphics settings switched to High. But, at times, there are slight screen tearing artifacts on the 13-inch model.

•Verdict: The new Apple MacBook Pro's Touch Bar is not revolutionary, but certainly a good thing to have. If you want something more portable, the 13-inch model is for you. If you want a high-resolution big screen and more powerful machine with discrete graphics, get the 15-inch model. That is my choice as well.

A version of this article appeared in the print edition of The Straits Times on November 23, 2016, with the headline 'New MacBook Pro in touch with the future'. Subscribe
Topics:
More
Whatsapp Linkedin FB Messenger Telegram Reddit WeChat Pinterest Print Purchase Article Copy permalink