SINGAPORE - Pathlight School students will now learn how to code as part of a national drive to teach computational thinking in all schools.

Swift Accelerator, a coding programme based on the Everyone Can Code curriculum delivered by Apple-certified trainers, was launched on Wednesday (March 13), marking the first time coding is made accessible to a special needs school in Singapore.

The 144-hour programme is said to deepen the skills and competencies of students, aged 13 to 18, who will be selected based on their aptitude and interest in coding.

The Everyone Can Code curriculum allows students from kindergarten to university to learn and write code using Swift, Apple's programming language.

About 5,000 schools, communities and technical colleges around the world are said to be using the curriculum, according to Apple.

Education Minister Ong Ye Kung said during the launch at ArtScience Museum: "Digital literacy could well be considered a critical third form of literacy for the future."

"We need to update our curriculum for our special needs students with these new items (coding). If we don't do that, what they learn might be incomplete or even irrelevant," she said.

She added that for the autism community, whose members have a natural inclination to learn things in a structured way and who have very good info-comm technology skills, it opens job opportunities and an avenue for them to excel as much as possible. 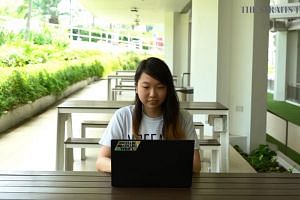 Women changing the face of tech

Mr Ong also noted that there is a need to demystify digital technology and make its learning accessible to anyone.

She said: "I don't think we can escape the future where technology will be with us at every turn.

"Singapore is being so thoughtful about incorporating the learning that its population needs, and realising that it needs to be for everyone."

She added that she is inspired by the words of Pathlight School student Kaeden Chan, whom she met at the launch.

The 13-year-old told her that his dream is not to be just an end-user of Apple's products, but to sell his own app on Apple's App Store.

In addition, he said he prefers to create games, instead of other apps, as they are fun to play and sell better.

It has also taught at the Dyslexia Association about how to use Google's productivity suites of Docs, Slides and Sheets.

At the same time, the Singapore University of Technology and Design will be introducing the Swift App Development Fundamentals course, which is developed based on Everyone Can Code.

In addition, Australia's Royal Melbourne Institute of Technology Online announced the Singapore launch of its online course on iOS App Development with Swift.

Both offerings are accredited by the SkillsFuture programme to support life-long learning of the Singaporean workforce.