After a three-year hiatus, Nokia mobile phones are officially returning to Singapore.

The first in the range to be relaunched here is the classic Nokia 3310. The talk-and-text-centric phone from the year 2000 will be on sale here next month, and will work on Singapore telcos' 3G networks.

Unlike the original, it will support basic Web-browsing and comes with a 2-megapixel camera.

The Straits Times understands the handset will go for less than $100 at all major retail outlets here, making Singapore one of the first in the world to sell this 3G-compatible "dumb" phone.

Finnish start-up HMD Global, which owns rights to the Nokia brand, believes that demand will come from consumers wanting to relive their nostalgia, and parents of young children.

The redesigned Nokia 3310 was first launched earlier this year in selected markets as it worked only on 2G networks, which Singapore shut down in April.

"We underestimated the demand in some markets which are switching off or have switched off their 2G networks, (including in) Singapore," an HMD Global spokesman told The Straits Times. So it decided to support 3G on 3310 "to allow more people to enjoy a modern classic reborn". 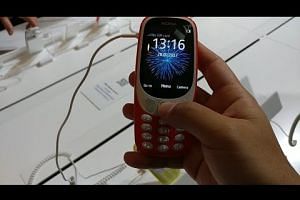 Relaunched Nokia 3310 is nostalgia in a device 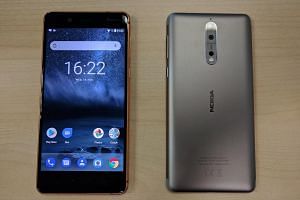 He added: "Singaporeans are trendsetters in determining popularity in developed markets."

The Finnish brand was once synonymous with mobile phones, but lost substantial market share when touchscreen smartphones became popular. In 2014, Microsoft bought over Nokia's ailing mobile phone business for US$7.2 billion (S$9.8 billion), but wrote off the purchase a year later and laid off 7,800 people globally.

In May last year, HMD Global, a start-up led by former Nokia executives, acquired the exclusive rights to use the Nokia trademark from Microsoft until 2024.

The revamped 3310 - which has a battery that can last for a month in standby mode - hits the sweet spot for online bookstore owner Jiang Meiru, 35.

She would give the 3310 to her eight-year-old son - to arrange for his pick-up on days when he stays back in school for co-curricular activities. "I don't want him to be distracted by smartphone games or be exposed to social media at such a young age," she said.

Housewife Sakura Siow, 43, would also give the 3310 to her seven-year-old daughter for emergency calls.

More importantly, she will know where to get a replacement phone for her 73-year-old mother if her current "dumb" phone breaks down. "She only needs to make calls," said Ms Siow.

A version of this article appeared in the print edition of The Straits Times on September 29, 2017, with the headline 'Nokia is back - and with nostalgic 'dumb' phone'. Subscribe
Topics:
More
Whatsapp Linkedin FB Messenger Telegram Reddit WeChat Pinterest Print Purchase Article Copy permalink