Netflix chief Reed Hastings told the Singapore media yesterday its focus now is on acquiring more global content rights so that its customers here can enjoy the same content as those overseas.

This means there will be no need for consumers here to use virtual private network (VPN) services to tap Netflix's fuller library, which is meant for the US market.

Even after Netflix launched its service here in January, some have been using VPN services to access its US library as the Singapore offerings pale in comparison. But some users, including customers of Internet service provider MyRepublic, have had their VPN access blocked as early as February.

"We did announce a quarter ago some (VPN blocking). We don't know of any more coming," said Mr Hastings, when asked if more users will be blocked.

"We know it's frustrating... we are growing into global content (deals) so everybody has the same content," said Mr Hastings, who was here to speak to local start-ups at the Media Development Authority of Singapore's inaugural Distinguished Speaker Series at Ayer Rajah Crescent yesterday. 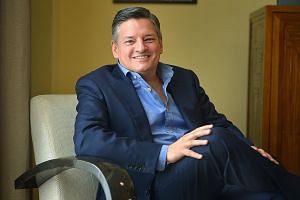 He said he regretted not acquiring global rights for Netflix's early productions, such as political drama House Of Cards, which are distributed only in the US and Canada.

But it has "learnt that lesson", he said. The new original productions it commissioned, such as superhero series Jessica Jones and Daredevil, are now distributed globally.

Marketing director Ian Tan, 40, who can still use VPN services to enjoy Netflix's US offerings, said: "Should they block my VPN access, I will just move to Amazon."

Some observers were concerned that VPN blocking had affected Netflix's growth. Netflix, which has more than 75 million subscribers globally, declined to reveal its number of Singapore subscribers.

Attributing the softened second-quarter projections to seasonal fluctuations, Mr Hastings said: "There is no sign of slower growth... We will pass the 100 million subscriber mark next year."