S'pore-registered firm is no charity, but the majority of its staff are persons with disabilities

After making the nearly four-hour journey from Kuala Lumpur to Penang in Malaysia, Mr Raj Kumar Selvaraj was looking forward to a well-earned outdoor break from his job as a communications development specialist.

But little did the then 29-year-old know that hiking through the Bukit Hijau area in 2009 would be the last time he would have full use of his limbs.

Mr Raj slipped on moss-covered rocks along the way and fell - injuring himself so badly that he was left paralysed from the neck down.

This meant losing not just his mobility but also his ability to continue working in his job.

This loss of independence and having to constantly rely on others stung Mr Raj hardest and he said it felt like he had hit "rock bottom".

But things are different now.

Mr Raj, who is Malaysian, works as a quality assurance and process manager for Genashtim, a Singapore-registered cloud-based digital solutions provider that focuses on e-learning programmes.

He joined in 2011 and uses voice recognition software to input commands on his computer.

He works from home most of the time, and gets around on his wheelchair.

This is what makes Genashtim so special - the majority of the company's employees, who are scattered over 10 countries, are persons with disabilities (PWDs). 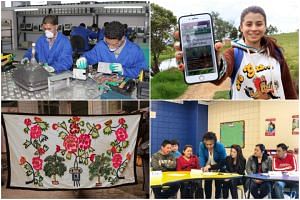 According to the United Nations, in developing countries, 80 to 90 per cent of PWDs of working age are unemployed.

This figure is between 50 and 70 per cent in industrialised countries.

Since Genashtim's inception in 2008, founder Thomas Ng, 62, has sought to use technology to make his company as inclusive as possible so that those who are marginalised from society can seek employment.

Some of his employees are bedridden, some can move only one finger, and some have to be plugged into machines at all times to survive, while others are visually impaired.

But Mr Ng believes that these disabilities do not limit their capability to work - they use communicative technological tools and messaging platforms, like Skype and WhatsApp, to communicate with one another around the world.

Genashtim has no office and most of its staff work from home.

Mr Ng says that his company's structure, likely one of the first of its kind in the world, is ideal for PWDs as they need only switch on their computers and coach students, liaise with clients or develop software from their own homes.

By taking away the problem of commuting, Genashtim's work-from-home model allows its employees to function just like everyone else.

"Our mission is to leverage technology in the Internet, to connect marginalised people and resources to the global economy," says Mr Ng.

Genashtim administers e-learning content of reputable providers, like Cornell University, develops its own content to suit its clients and also designs specialised e-learning platforms for organisations.

Since Genashtim's inception in 2008, founder Thomas Ng, 62, has sought to use technology to make his company as inclusive as possible so that those who are marginalised from society can seek employment. Some of his employees are bedridden, some can move only one finger, and some have to be plugged into machines at all times to survive, while others are visually impaired.

Some of the company's clients do not even know that the majority of its workforce are PWDs.

Mr Ng believes that the work of his employees should be held to the same professional standard as that of any other company.

Genashtim, he stresses, is a profit-making company and not a charity.

It is important to him that his clients see it that way so that his workers can regain the confidence and independence they might have lost due to their unfortunate circumstances.

"We have to build this as a commercial company, otherwise it's not sustainable," he says. "If we have to live on sympathy, we might as well become a non-profit organisation."

By the looks of it, Mr Ng is doing something right.

The company's focus on social inclusion, not just in Singapore but also internationally, earned it two awards at the inaugural Brands For Good Awards last year, which is sponsored by Maybank Singapore and e-commerce global trading platform BBX.

A panel of eight independent judges gave Genashtim the "Social Giving and Engagement" and "Diversity and Inclusiveness" awards.

Genashtim is also helping another group of marginalised people in society - refugees.

Not all countries are welcoming to displaced people, who might find it hard to find a job to rebuild their lives, says Mr Ng, adding that his company's tech-centredness and global presence allow him to hire them.

About 30 per cent of his workforce are people who have fled countries, like Syria and Afghanistan, and are now working remotely for the company.

Mr Ng says Genashtim provides not only a stable income for its employees and their families, but also a chance to regain their dignity and an ability to provide for themselves.

Mr Raj agrees. He no longer has to lean on his family to provide the care that he needs.

Mr Raj now earns a decent salary, which allows him to pay for his daily expenses and the care that he needs.

"At least, financially, now I'm able to independently manage most of my essential expenses, so I do not have to depend on my family as much," he says. "I'm so grateful."