Artificial intelligence (AI) is inching its way into every consumer product imaginable - from wearable devices that read a dog's mood and companionship robots that ask for cuddles to beauty systems that analyse skin tone and outfits that recommend suitable shades of lipstick.

These gadgets greeted visitors at Consumer Electronic Show (CES) 2020, the latest edition of the biggest consumer tech show in the world, after it officially opened in Las Vegas yesterday.

"This new IoT bears testimony to the extent that AI is permeating every facet of our commerce and our culture," he said at a media preview event on Monday, adding that AI will steer how technology will go in the new decade.

"Now, commerce is pretty well understood and we endorse that as we want to advance our economies around the world, but culture is really interesting to me as a researcher, because we're talking about technology's influence on human behaviour," he said.

He cited the example of how fast-food giant McDonald's is looking at bringing AI-powered voice assistants to its drive-through restaurants in the United States.

"People working in fast food - they've got a tough job," he said.

For instance, the service crew needs to get the order right, organise it by including the right condiments and serviettes, and settle the payment. "So adding a little bit of intelligence for that first initial interaction of taking the order frees the human worker to really focus on handling the money transaction and providing better service."

Indeed, going by what was showcased at the preview event, AI continues to make its mark in the consumer tech world.

Japanese company Groove X showed off its Lovot companionship robots, which make use of AI via facial and speech recognition technology to identify their owners to ask for cuddles and stay by their side. The pint-sized robots received many coos from onlookers as they waddled their way around the hall on their own.

Another Japanese firm, Inupathy, developed a wearable device that reads a dog's heart rate and translates it into various colours to represent different emotions.

French beauty giant L'Oreal debuted the Perso, an AI-powered system that creates on-demand and personalised formulas for skincare, as well as custom shades for foundation and lipstick. 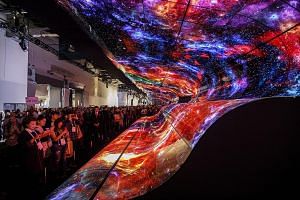 Users can use a paired app to discover the perfect lip colour to match their outfits, for example, and have the exact shade mixed at home on the spot.

Powering this new idea of the intelligence of things on a grander scale, of course, is 5G technology, said Mr Koenig.

Even though 5G is the fifth mobile generation, he said, it is the first that will eventually be led by enterprise applications, such as those that help farmers better plan crop yields.

Drone fleets with sensors which fly over massive plantations can look for plant disease or mark out the areas that need more water.

CTA's director of research Lesley Rohrbaugh said at the same media event that over 50 networks worldwide will be deploying 5G capability this year, which will fuel the demand for 5G handsets globally.

CES 2020, owned and produced by CTA, officially runs until Friday in Las Vegas and is expected to draw over 170,000 attendees. Even though it is primarily seen as a tech products show, the technology behind these products often signal the biggest tech trends of the year.