A digital makeover is being planned for the Kampong Glam Malay heritage site in Arab Street, which many merchants there believe is critical for them to survive the onslaught of online shopping.

As part of the Government's plan to transform the retail sector, merchants there can expect to see Wi-Fi hot spots dotting the shopping belt, or use data analytics tools to provide personalised promotions to consumers on their mobile phones. The aim is to revive the shopping buzz in the area.

Ms Sherry See, owner of Utopia Apparels in Bussorah Street, said the number of visitors to Kampong Glam has declined by up to 40 per cent over the last 10 years.

"Some fabric shops have also closed down due to poor business," she said, noting that Kampong Glam merchants need help to make them more "discoverable" via an online directory, for instance.

"Many shoppers do not venture beyond Arab Street or Haji Lane," she added.

Mr Mohd Zain Said, director of the SME Centre at the Singapore Malay Chambers of Commerce and Industry (SMCCI), said small and medium-sized enterprises also need to automate to do more with fewer staff.

"It's the only way to meet the new demand and expectation of customers," he said.

At the very least, they must use technology to track inventory, he added. The next level would be to go cashless or create a Web store front to reach out to more buyers.

Kampong Glam's makeover is the first such initiative by the Infocomm Media Development Authority (IMDA).

"When completed, it would be an interesting showcase that interweaves tradition and digital technologies," said Minister for Communications and Information Yaacob Ibrahim in announcing the move yesterday. 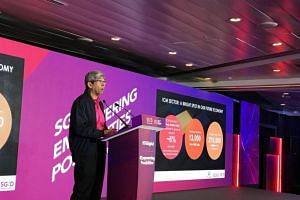 It will also complement the retail Industry Development Plan (IDP), also announced yesterday. The plan is the second of many such blueprints containing checklists and approved technology packages to help lift sectors where innovation has been lagging. The first IDP for the logistics sector was announced by IMDA on Wednesday.

To complete Kampong Glam's makeover, IMDA and Spring Singapore have signed a memorandum of intent with SMCCI and One Kampong Glam business association.

They will jointly identify technologies that could lift the appeal of the area by creating a richer and more immersive retail experience. The plan is expected to be ready in three months, and the revamp is likely to start in the second half of next year.