Funan DigitaLife Mall has hosted many product launches through the years. Here are a few of the memorable ones:

The launch of Microsoft's Windows 95 sparked a worldwide frenzy, with fans across the globe queuing up for the first operating system with a graphical user interface. 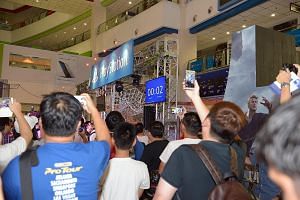 In Singapore, over 1,400 copies were snapped up at the Funan launch, which far exceeded expectations.

The team in charge at Microsoft had prepared only 400 copies of the software, and they had to arrange for trucks to deliver additional copies to fulfil demand.

On the day that Diablo III was launched here, it sold 35,000 copies - setting a record for first-day video games sales in Singapore. The first fan in line, Seth Chan, who was then 24, had been standing in line since 6am on Monday morning, although the game was launched only at 3pm on Tuesday.

Xbox One for the road

More than 800 fans queued up to get their hands on the latest console from Microsoft, the Xbox One.

The bundle cost $639, and came with the console as well as a controller, headset, cable, and a copy of Fifa 15.

Fans of the 1998 video game StarCraft and its Brood War expansion waited 12 long years for a sequel and, when they finally got it at the game's launch event at Funan, some were overwhelmed.

The first in line was Nicol Tan (left, wiping his tears), who was then a 23-year-old student chef. A caption in The Straits Times the day after the event said he was so excited that he "alternated between crying and grinning".