The use of controls gives you less control over the game

Armagallant is a cross between a deck-building game and a real-time strategy game. Think Hearthstone meets WarCraft.

It is an ambitious idea. However, it is one that works much better in theory than in practice.

The game by Rock Nano Global is primarily a player-versus-player game, and has no campaign.

Before starting a match, players have to draft a 40-card deck, drawing on five elements: water, fire, earth, light and dark. There are both characters and spells, and decks are built around synergising them.

At the start of each match, players draw a random handful of cards, with each costing a varying amount of mana. Mana replenishes with time, and once you have enough, you can cast a spell or summon a creature, which causes the units to appear at a fixed point on the map.The map has three main points, called Monoliths, to control. Capturing each will slowly drain your opponent's life points.

There are also other ways to damage your opponent, like capturing randomly spawning crystals or destroying their units. 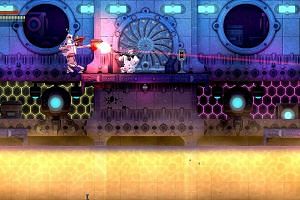 Rocketbirds 2: Evolution is tough but rewarding

Each player starts with 100 life points, and the first to reduce the enemy's points to zero wins.

In theory, this sounds like the recipe for a hectic, scrambling, complex game with many variables and a high skill ceiling. In reality, we get an unwieldy game that plods instead of flies.

A lot of this is due to the controls. Something as complex as a real- time strategy game, even if you are only adopting elements of it, just feels cumbersome with a controller instead of mouse and keyboard.

There is no clicking on the mini- map (players scroll slowly only by using a joystick), no control groups and no custom hotkeys. Instead, to select a creature or group of creatures, players have to press R1 or L1 and one of the action buttons.

I also could not fully try out the game, as I could only play against AI. I queued online for at least 10 minutes on multiple occasions, but never found anyone to play against.

•Verdict: An ambitious game, but having to rely on a controller to play hampers gameplay significantly.

A version of this article appeared in the print edition of The Straits Times on May 11, 2016, with the headline 'Armagallant just plods on'. Subscribe
Topics:
More
Whatsapp Linkedin FB Messenger Telegram Reddit WeChat Pinterest Print Purchase Article Copy permalink