Becoming a professional gamer was a dream come true for Mr Vikash Singh - one he finally realised at age 27, when he quit a job as an offshore marine engineer to play video games competitively full time.

"I'm like a father figure to the younger players," he says, jokingly, as the other five members of the competitive Overwatch team he belongs to are between 17 and 22 years old, making Mr Singh the most seasoned player among them.

He takes it upon himself to keep the team focused and working together - an important element in Overwatch, as it is a team-based shooter game which requires high levels of collaboration and communication.

While Mr Singh has always been passionate about eSports, it was never a full-time career. He spent five years working full time while coaching and managing teams on the side in games such as the first-person shooter Counter Strike: Global Offensive.

However, Chaos Theory has breathed new life into his dream, as he is now able to draw a salary from it. But Mr Singh still had to take a pay cut from his previous job in order to pursue this new career. 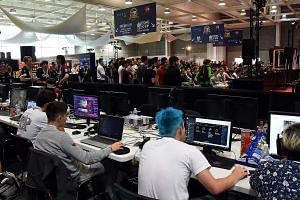 "It was a risky decision. I was thinking very hard about it, whether I should chase this dream or not," said Mr Singh, who is the eldest in his family. He has three siblings. "I was contributing financially to my mother, so I had to convince her that I will continue maintaining the finances for the family."

But he believes it is all worth it. "The atmosphere, the blood pumping in my veins, the hype of tournaments - all these continue to draw me towards competitive gaming," he said.

"Joining a team full-time means I can commit more and put out my hundred per cent both inside and outside the game."