The iconic IT mall hosted more than 30 game, product launches

Monday night was a bittersweet one for freelance writer Darren Chew. He was among the first in the world to get his hands on the latest Uncharted 4: A Thief's End action-adventure shooter game after spending about eight hours in line at Funan DigitaLife Mall.

But it is also the last time he would get the chance to do so, as Monday's event organised by game publisher Sony Computer Entertainment marked the last game launch at Funan before the mall's shutters fall for the last time in July.

"It feels like part of my gaming life has been taken away from me," said the 38-year-old. "I've queued here for so many games I've lost count." 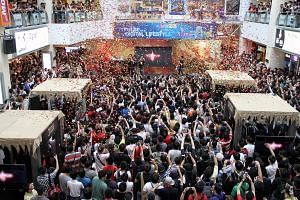 Funan has long been the location of choice for big product launches. Over the past 10 years, the mall has played host to about 30 major game events, which are among the biggest events that have taken place there, said Funan's centre manager Tan Pei Cheng.

These include huge fan favourites like Blizzard Entertainment's Star- Craft II and the Halo franchise by Microsoft Studios, and Microsoft's operating systems Windows 95 and Windows 7.

Such events would draw thousands of fans, who lined up in snaking queues that would stretch out of the mall and across the road to Peninsula Plaza.

More than 10,000 gamers stood in line for the bigger titles. For instance, the launch of Blizzard's Diablo III at the CapitaLand-owned mall on May 15, 2012, attracted the mall's highest footfall of 55,000 shoppers on a single day.

One of those fans was Mr Ng Koon Yu, 27. The equity research analyst queued for the release of military science fiction strategy game StarCraft II and action role-playing game Diablo III in 2010 and 2012 respectively.

Aside from wanting to play the game early, Mr Ng also wanted the in-game goodies that were being given away at wthe launch.

While such dedication may seem crazy to some, Mr Ng said: "Other people queue up for Hello Kitty or Tim Ho Wan (a popular chain of dim sum restaurants), so I guess queueing up for the release of some of the biggest franchises in gaming history is my thing."

At Microsoft Studios' Gears Of War 2 launch in 2008, more than 2,000 copies of the Xbox and PC exclusive were sold.

Mr Ben Tan, former general manager of retail sales and marketing at Microsoft Asia-Pacific, said the wait was so long that fans started to get tired and hungry.

"I told my guys to buy as much food and water as they could get their hands on," he recalled.

"They went into Macs, and tried to order 100 burgers at a go, but they couldn't process that. They processed about 50 burgers for us, and we bought biscuits and packet drinks from elsewhere."

Ms Chia Pei Siang, senior manager of group communications at CapitaLand, said: "It helped that the game developers made the deal sweeter for fans with fringe activities and freebies."

Mr Kwan Yan Wei, 28, queued up for several Microsoft Studios titles including Halo, Ninja Gaiden 2, Gears Of War 3 and the Xbox One console.

"Many of us queued up not just to be the first to play, but also because of the exclusives that were given out," said the teacher.

"I will miss the atmosphere at the launches. There would usually be an emcee hyping everyone up, and they would give away prizes in lucky draws or quizzes."

But the glory days of such large launches are potentially over, even if a timeout had not been called on the 30-year-old mall, which will be revamped over the next three years.

About 388,000 sq ft will be added to the mall's current 482,000 sq ft gross floor area, and CapitaLand is inviting the public to contribute ideas for the mall's redevelopment.

Mr Marc Einstein of market research firm Frost & Sullivan said the ease of downloading a game over the Internet has contributed to declining box sales.

"It's just so m`uch more profitable to distribute digitally as opposed to physically," said Einstein.

"There's not as much money to be made from physical sales, and it makes more sense to invest in digital."

When the mall closes in two months' time, gamers say they will miss the sense of community created through eager anticipation of new products, and the related events, ranging from tournaments to free gameplay booths, at these game launches.

"There was always this feeling of excitement for a new game," said student Juan Miguel Rodriguez, 19.

Funan was also where he first cut his teeth on the competitive Halo circuit four years ago, when he got a taste of winning his first tournament at a launch event for Halo 4.

"I'll miss the place. Not having tournaments there is just so different," said Mr Rodriguez, who represented Singapore at the Halo World Championship in California two months ago.

Retailers at Funan have started to make the big push to clear their goods before the mall’s shutters go down for good.

Here are some of the best last-minute deals you can grab there while stocks last: