More readers are borrowing electronic books, or e-books, from libraries, with mobile devices making it easy to read while on the go.

As a result, the number of e-books borrowed has almost quadrupled in the past five years. Eleven million were borrowed last year, compared with three million in 2009, according to figures from the National Library Board (NLB).

The e-books can be accessed using devices such as mobile phones, tablets like the iPad, computers and e-readers like the Amazon Kindle.

There are more than 3.5 million titles of fiction and non-fiction e-books across four languages that are available for library users to borrow in a variety of formats, including PDF, EPUB, Flash and MP3.

NLB said the majority of English e-books borrowed are fictional works such as thrillers, science fiction and romance novels. Non-fiction titles on self-improvement are also popular among adult readers.

The 12 databases contain a variety of materials, including works by Singapore authors. Only two of them - Overdrive and Apabi - allow users to download e-books into a device, which they can use to read these e-books offline for three weeks. The other databases contain materials which require an Internet connection to browse.

Data from the popular Overdrive collection, which contains general fiction and popular titles, showed that more than half of borrowers are between 30 and 50 years old. 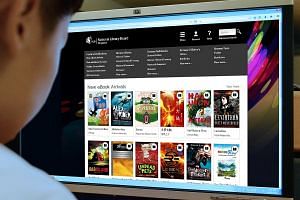 How to borrow e-books from the National Library Board

Those between 30 and 39 years old form the largest percentage, at 27 per cent, followed by those aged 40 to 49, at 26 per cent. NLB said: "These users would mainly be the working population, who have busy mobile lifestyles and who read on their electronic devices."

Ms Pamela Nai, 37, works in the finance industry and likes borrowing books without having to go to the library. It is a convenient way to read while travelling, she said.

"It's also a good way to find new books to read, as there are categories like the New York Times best- seller list. It's easy to find books when you don't know what to read and want to find something new."

E-books are also popular among children. Retired education officer Wong Seow Huar, 66, would access the materials for his nine-year-old grandson. "When he was younger, he liked picture books because they have sound, music and also interactive games," said Mr Wong.