SINGAPORE - Companies and countries such as Singapore have to share resources, integrate their processes with others and find new ways to innovate their systems in order to remain competitive in the fast-paced digital economy, urged Minister for Trade and Industry Chan Chun Sing.

He expressed his concern that businesses and countries around the globe would "be poorer" for not working together.

"Today, the world is facing a great challenge. There are many parts of the world that do not believe in integration. Instead, we risk being fragmented, being Balkanised. And if the world Balkanises, if the world fragments... we will all be poorer for it," he said.

He added that companies which rely on data flowing internationally, such as IBM, Google and PayPal, would not survive in the digital economy if the world became fragmented.

He was speaking at the opening address of the IBM Think Singapore 2019 conference on Wednesday (Aug 14), where he touched on the digital economy and what companies and Singapore as a nation need to do to remain competitive in it.

A 2016 study by market research firm Oxford Economics and telecommunications company Huawei estimated that the size of the global digital economy amounted to about US$11.5 trillion (S$15.9 trillion) or more than 15 per cent of global gross domestic product (GDP).

Closer to home, Singapore's Digital Economy Framework for Action estimated last year that the digital economy would contribute an additional US$10 billion to the Republic's GDP by 2021.

In his speech, Mr Chan said both companies and countries have to constantly find new ways to create or improve their business process, as they cannot take their past successes as a sign that they will do well in the digital economy.

He pointed out that many of IBM's products today are different from those 20 years ago - just as how the products it makes 20 years from now will also be different.

"And that is the same lesson for Singapore. For us to continue to survive and thrive, we will have to be on our toes to continuously integrate with the rest of the world, because what we have today came from the past, and the past is not a promise of the future," he said. 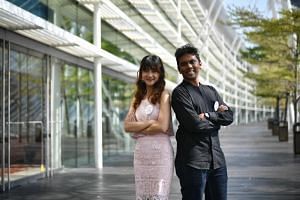 Efforts to develop workforce for digital economy must include workers from all sectors: Iswaran

"The products, the ideas that have worked well in the past are not a guarantee for success for the future."

More than 1,000 business leaders and experts gathered for the conference, held at the Sands Expo and Convention Centre at Marina Bay Sands, to discuss how companies around the world were using cutting-edge technology to transform their businesses.

During the one-day conference, business leaders from organisations such as the Housing Board, DBS Bank and DHL Express also shared their insights about how they used technology like artificial intelligence, data science and quantum computing to improve their workflows and customer experiences.

IBM Asia-Pacific's chief executive officer and chairman Harriet Green in her keynote speech held up Singapore's efforts to become a Smart Nation and an attractive hub for businesses to set up shop here.

"Singapore is a small economy with technology, innovation and talent at the core of the Smart Nation initiative... and it is underpinned, as the minister said, by a very high level of collaboration across the ecosystem, a real commitment to responsible stewardship," she said.

"No wonder the rest of the world is looking to open and smart Singapore for very best practices and opportunities."

Correction note: An earlier version of the story said that Mr Chan pointed out that many of IBM's products today are different from those two years ago. He had said 20 years ago. We are sorry for the error.