SINGAPORE -It's not quite Star Wars technology but visitors to the four-day IT Show 2018 at Suntec Singapore - which opened on Thursday (March 15) - can catch a new 3D-hologram display that is being showcased to the public for the first time in Singapore.

The brainchild of a British company, the display - called the Hypervsn Wall - uses tech that creates the illusion of holograms projected in thin air. This is done using blades with LEDs that rotate.

The larger-than-life image wizardry has already caught the attention of Singapore companies here, with more than 100 enquiries made to the high-tech visual solutions firm behind it, Kino-mo.

More details on the companies were not available as the discussions are still in the early stages, said Mr Vadzim Tsitou, Kino-mo's Asia partner.

But he added that it was this interest that prompted the company to showcase the hologram tech in Singapore. It was one of the highlights in January's Consumer Electronics Show in Las Vegas, but that was limited to trade visitors at the event.

Mr Tsitou said he felt the IT Show 2018 was a good platform to showcase such technology since it was an event which "consolidated a lot of electronic goods and technologies".

The annual IT Show is in its 17th year and is organised by Exhibits Inc, a subsidiary of Singapore Press Holdings.

Those looking to buy new gadgets can get cash vouchers for these purchases by trading in their old gizmos - including video game consoles, televisions and cameras - at the event.

Like previous iterations, this year's consumer electronics fair also features many deals and promotions, with many a bargain hunter spotted too.

For instance, telco M1 is offering a 2Gbps fibre broadband plan at $39 per month. This is an upgrade from 1Gbps, the usual speed for the plan, but it is limited to the first 500 customers at the event. 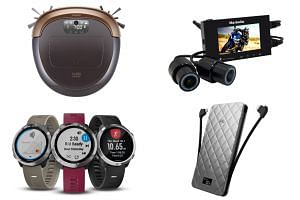 She added the deals were value-for-money and shared that she enjoyed the event in general as there were many things to look at.

Other visitors like Mr Eric Tan were on the look out for promotions on laptops and printers. The 39-year-old commercial pilot spent about $2,000 on a 15.6-inch Dell Inspiron laptop for his children and a HP OfficeJet Pro wireless printer for his home office.

He said: "With some of the promotion bundles, it's probably cheaper than what's out in the stores."

The IT Show is on from 11am to 9pm daily until Sunday. Admission  is free.