LAS VEGAS (AFP) - Want to manage your stress? A "neurofeedback" headband could help. Need to be sure your elderly father is taking his medication? Attach a sensor to his sock.

With virtual reality and motion-tracking sensors, the tech world is borrowing some of the gadgetry from self-driving cars, gaming and fitness applications and bringing them to medicine.

The 2018 Consumer Electronics Show, a high-tech showcase this week (Jan 9-12) in Las Vegas, included the latest advances in digital health, suggesting promising avenues for treatment, even if many lack full-fledged medical approval.

Tech firms are looking to cash in on a digital health industry estimated at about US$200 billion (S$264 billion) annually in areas ranging from app-based diagnoses, to pain management and telemedicine.

A growing number of startups focused on the brain - capturing or "hacking" brainwaves with the goal of improving sports performance, enabling relaxation, aiding sleep, and potentially treating pain, anxiety or other ills.

South Korea-based Looxid Labs featured a brainwave-monitoring headset which is now in the research phase but could be used for treatment of ailments like post-traumatic stress syndrome.

"We can use these brain sensors to analyze emotions and stress level," said Looxid's Honggu Lee.

Neurofeedback, which teaches self-control of brain functions, has been around for decades, but the arrival of low-cost sensors has made it easier to produce affordable consumer devices.

While some exhibitors said their claims are backed by research, a 2016 study said long-term results were still inconclusive.

Some of the same sensor technology being used to help runners track performance or golfers perfect swings is now being adapted for medical applications, notably for the elderly.

Sensoria Fitness, a Washington state startup which has produced wearable tech for runners and soccer players, unveiled a system to use sensors to keep track of seniors and persons in rehabilitation.

By attaching sensors to socks, the system can detect if a patient is taking medication, doing exercises or is in distress.

"If a patient is in distress it affects their gait," explained Sensoria founder Davide Vigano.

France-based Helite was at CES with hip airbags designed to deploy when someone falls, protecting him or her from shattering bones.

A Japanese firm, Xenoma, also aimed to help those at risk of falls, as well as people with dementia, by adapting its wearable clothing designed initially for golfers. 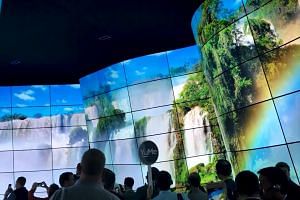 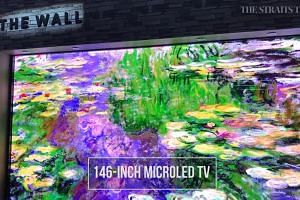 "We track their movements and if they go too far we can find them," said Xenoma engineer Yihan Qian.

Other firms offered tools for gauging the risk of disease.

Maryland-based startup RightEye announced an eye-tracking assessment in a gaming application to screen for concussions and other brain health problems, with the possibility of early detection indicators for autism and Parkinson's disease.

Virtual and augmented reality developed for gaming is being adapted to therapies such as rehabilitation and pain management, potentially offering hopes for treating opioid addiction.

Brennan Spiegel, research director at the Cedars-Sinai medical center in Los Angeles, told a CES conference the hospital has seen benefits of VR treatment for pain, which could help in dealing with the opioid addiction crisis ravaging the United States with tens of thousands of deaths annually.

"Over the next three years we will be testing this to see if we can make some inroads in opioid overprescribing," Spiegel said.

Amid optimism, some medical professionals say regulations or standards are needed to manage the explosion of new medical technologies.

"The consumer is going to get blindsided sooner or later from a mobile health app that either spews its data out inappropriately or will create a harmful outcome from a clinician," said James Mault, chief medical officer at Qualcomm Life, the digital health division of the chipmaking giant.