Price: To be confirmed, available next month

Having been tantalised by a non-working prototype of the Panasonic Lumix S1R full-frame mirrorless camera at last year's Photokina camera trade show, I was excited to finally get my hands on a working set at CP+ 2019, even though my hands-on session lasted all of five minutes due to long queues.

In terms of design, the S1R looks exactly like the S1. But while the S1 uses a 24-megapixel full-frame image sensor, the S1R will have a higher megapixel count of 47.

Beside this command dial, there is a small monochrome display that shows the most important information, such as aperture, shutter speed and ISO.

The right rear of the cameras has an array of buttons, including Display, Quick Function and Back, as well as a directional pad and a wheel dial that are easily accessible with your right thumb. A mini-joystick sited near the thumb rest lets you adjust the autofocusing (AF) point swiftly.

On the left side of the camera, there are compartments for the audio jacks as well as an HDMI port and a USB-C port that can be used for charging. The compartment on the right houses dual memory card slots that let you fit in an XQD card and an SD card. 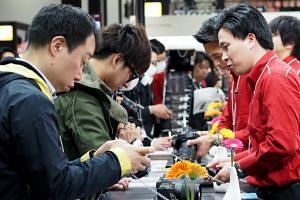 The AF was pleasantly fast in the well-lit studio that Panasonic set up in the booth. I got a focus lock on a model's face in less than a second. You can use both the mini-joystick or the 3.2-inch touchscreen display to move the AF point.

Zooming in to look at the captured photos from the display, I saw sharp images, great details and a nice colour reproduction of the flower background behind the model.

This is one full-frame mirrorless camera to look out for next month.