The last of the woolly mammoths died about 3,500 years ago, when the Egyptians were still building their pyramids.

Although the giant animals once roamed the vast, frozen landscapes of northern Asia, Europe and North America, they likely became extinct due to climate change and being hunted by people.

But now, a team of scientists from Singapore and the United States has published research that is a step towards resurrecting the prehistoric creature.

They have sequenced, for the first time, a highly detailed and complete genome or genetic blueprint of the woolly mammoth, which researchers could use to start recreating the animal. The team believes that its work will lead to a "mammothified" Asian elephant before long and, eventually, the resurrection of the mammoth. 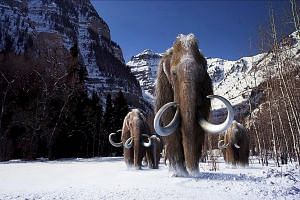 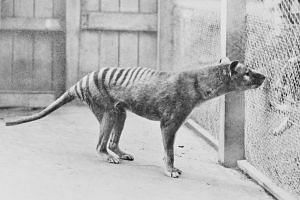 Said Nanyang Technological University's (NTU) Dr Stephan Schuster, who was part of the effort: "In the series of steps that needs to be done to bring the mammoth back to life - and there are many - having its genetic blueprint, which we have now released, is the very first step."

SAVE THE ENDANGERED CREATURES

Why bring back another elephantid when we cannot even keep the ones that are not extinct around?

PROFESSOR ALEX GREENWOOD, from the German Leibniz Institute for Zoo and Wildlife Research, questioning the need to "resurrect" the woolly mammoth when existing elephants (above) are on the brink of extinction

The team's research could also benefit the mammoth's surviving relatives, the Asian and African elephants.

The genes that might have helped the mammoth to survive in the Arctic's extreme cold, for example, could be inserted into Asian elephants to help the endangered species tolerate colder temperatures, expanding its range.

Already, scientists at Harvard University in the US have claimed to have successfully recreated mammoth genes and inserted them into lab-grown live cells of an elephant, although the work has yet to be published in scientific journals or reviewed by peers.

In the Singapore-US effort, researchers from NTU, Penn State University and the University of Chicago used next-generation sequencing, a technology that has become cheaper and more powerful only in recent years, to delve into the preserved hair of two woolly mammoths - one which died about 60,000 years ago, the other 20,000 years ago.

The team also broke scientific ground by sequencing the complete genomes of three living Indian elephants - the mammoth's closest living relative - for the first time. By comparing the genomes of the woolly mammoth and the Asian and African elephants, the scientists discovered the differences that made the mammoth unique.

They identified about 1.4 million genetic variants unique to the mammoths. These caused changes to the proteins produced by about 1,600 genes, and are likely linked to the warm-blooded animals' evolution to survive in the frigid Arctic as the climate changed.

Unlike other elephants, the mammoths had a two-layer coat of wool topped by long, coarse fur, "almost like you would make a down jacket today", said Dr Schuster, a research director and professor of environmental genomics at NTU.

They also had a layer of fat under the skin up to 10cm thick to keep warm, and small ears and tails to reduce heat loss and frostbite, while long curved tusks probably came in handy to move snow out of their way.

So far, the Singapore-US team has definitively uncovered the work of just one of the 1,600 genes.

The scientists referred to databases of known gene functions and looked at earlier mice studies to infer how the genetic changes might have affected the mammoths.

In mice, changes in the same genes had an impact on circadian clocks, temperature sensation and skin, hair and fat deposits - traits linked to cold weather adaptation.

But the scientists also went one step further by "resurrecting" one of the genes, called TRPV3. In every other sequenced mammalian genome, the gene did the same thing - but not in the mammoths.

The team produced synthetic copies of the gene from a mammoth and an Asian elephant and put them into separate cell lines or colonies, which then produced different proteins.

"Luckily for us, we knew that there were mice that also did not have an active TRPV3 gene," said Dr Schuster. "We might have hit the jackpot with this gene, because those mice had much more curly hair and looked much more woolly compared to other mice."

He added that when the team gave the TRPV3-inactive mice a choice between going to a cold area and going to a warm area in their cages, they invariably chose the cold area.

"This gene very likely not only affects their coat, but also makes them more accepting of cold."

The team studied hair samples from eight other mammoths to make sure the TRPV3 gene mutation existed in all of them and was not a freak change in the two mammoths it had sequenced.

Now that the scientists have the list of 1,600 genes, they can test each of them in the same way to determine their specific functions.

Some researchers are very keen for this to happen so that the genes' work can be linked to more unique traits. They include Dr George Church, a professor of genetics at Harvard Medical School, who has been studying how to create hybrids of Asian elephants and woolly mammoths that can survive in the Arctic's freezing temperatures.

Expanding the Asian elephants' range, especially into areas that are unsuitable for human habitation, could save them from extinction due to negative interactions with people, said Dr Church, who was part of the team that says it has spliced mammoth and elephant DNA.

"In theory, Asian elephants could adapt evolutionarily, but this would take a million years... Occasionally, species need some help," he said.

The hybrid elephants could also reduce climate change, partly by stomping on snow and soil and packing the ground tighter, thus preventing trapped greenhouse gases in the soil from escaping, said Dr Church.

But obstacles remain. Scientists have said, for instance, that to recreate the mammoths' DNA, researchers would need to know the chromosome and genetic changes to the mammoths in the 7.6 million years since they diverged from their African ancestors. And even if a single mammoth was created artificially, others would have to follow for the species' continuation.

The animals' genomes would also need to be tweaked to ensure diversity so they would not be wiped out by disease, for example.

Other scientists have raised ethical concerns and worries that "de-extinction" success would blunt the urgency of animal conservation. They point out that research money would be better spent on saving the vulnerable African and endangered Asian elephants.

Professor Alex Greenwood from the German Leibniz Institute for Zoo and Wildlife Research told reporters earlier this year: "Why bring back another elephantid when we cannot even keep the ones that are not extinct around?"

Dr Schuster agreed. "I think the biggest concern we should have, especially with global climate change, is to preserve species that are at the brink of extinction."

But he added: "Still, if you ask me will there eventually be a resurrected mammoth, the answer is clearly yes. If it can be done, somebody will do it." A version of this article appeared in the print edition of The Straits Times on July 31, 2015, with the headline 'Bringing Woolly back to life'. Subscribe
Topics:
More
Whatsapp Linkedin FB Messenger Telegram Reddit WeChat Pinterest Print Purchase Article Copy permalink