Banks and healthcare institutions may soon be able to verify the identity of users by scanning their faces and checking against the national biometric database.

There are plans for a National Digital Identity Facial Biometric System, and a trial of the system will be conducted in the second half of next year.

A government-backed facial identification service on the system will match the facial details captured on mobile devices or kiosks against the national biometric database.

This will allow organisations to accurately identify individuals. For instance, banks can easily verify online customers carrying out high-risk transactions such as those involvingcashier's orders of more than $10,000. Building owners can also identify visitors without their identity cards.

Some commercial buildings and hotels here are already scanning faces to control access to their premises and to tailor services for loyalty programme members - but they use individual biometric databases.

The uses of the national biometric database are currently limited to official purposes, including verification at border checkpoints and in some government buildings to limit access rights.

When facial attributes form a bigger part of one's digital identity, "banking, healthcare and financial institutions" would also benefit, said GovTech in tender documents seen by The Sunday Times. It did not elaborate on these benefits. 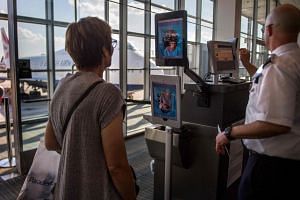 GovTech, which leads tech transformations in the public sector, is now evaluating 10 vendors that have submitted bids to build and operate the national system.

The tender, which closed last month, stated that the system must minimally support scanning from individuals' mobile devices or camera-fitted kiosks.

The system must also have anti-spoofing technologies to detect someone wearing a 3D mask, or when a photograph or video is used. This is done by looking at natural facial and eye movements.

The system must also be able to securely match scanned facial attributes against the Government's massive biometric database, which contains the facial images and identities of four million local residents aged 15 years and above.

A trial of the system will be conducted in the second half of next year, a GovTech spokesman told The Sunday Times.

"Decisions on when to launch the system will depend on the findings from the trial."

The first test for the new facial biometric system would be to simplify the registration process to become a SingPass Mobile user.

With the system, users will be able to register by scanning their faces on their mobile phones, which will then be verified instantly against the Government's biometric database.

The one-time registration now requires one's SingPass username and password, and a one-time password generated by a security token or delivered via SMS. This is repeated every time the user changes his mobile phone.

SingPass Mobile, which was launched last month, has partially removed the need to memorise passwords and carry around a security token.

It lets users securely file income tax returns, check Central Provident Fund balances or pay fines online by scanning their faces or fingerprints on their phones - after the initial registration.

Overcoming the woes of a curved spine