SINGAPORE - Tech giant Apple is going all out to tackle climate change, turning to solar power to run its entire Singapore operations, including its upcoming Apple Store in Orchard Road.

When its landmark solar power contract with a local supplier starts in January next year, Apple will be the first company in Singapore to rely entirely on solar energy.

The deal of an undisclosed amount was signed with Sunseap, one of Singapore's largest providers of solar energy, which manages solar installations on more than 800 buildings.

Today, 100 per cent of our operations in the United States and China are powered by renewable energy... Singapore is at the Equator and is a good source of solar energy.

In an exclusive interview with The Straits Times, Ms Lisa Jackson, Apple's vice-president of environment, policy and social initiatives, said: "Taking action on climate change has been a top priority for Apple."

"Today, 100 per cent of our operations in the United States and China are powered by renewable energy. Worldwide, the figure is at more than 87 per cent.

"Singapore is at the Equator and is a good source of solar energy."

Due to land scarcity, companies are installing solar panels on their rooftops and this will be Apple's approach too, with one of the largest installations of solar panels in Singapore soon to come up on one of its two buildings in Ang Mo Kio.

In the first such arrangement in South-east Asia, Apple will purchase solar energy harnessed from panels on other buildings to supplement its needs.

Traditionally, companies buy only the energy harnessed by solar panels installed on their premises. 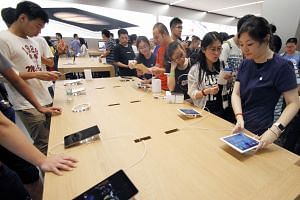 The Economic Development Board (EDB) said the deal, which it facilitated, is "pioneering" and will solidify Singapore's position as the leading clean energy hub in Asia.

"We are confident that this pioneering business model... will help Singapore address our space scarcity challenge and spur even more companies in Singapore to scale their renewable energy usage," said Mr Goh Chee Kiong, EDB's executive director for cleantech.

At 33 megawatt-peak capacity, Apple's purchase is the largest by any commercial company here.

Under the agreement, Sunseap supplies power at a preferential rate compared with retail electricity tariffs.

Apple is also on a hiring spree ahead of the opening of its first full-fledged Apple Store, rumoured to be at Knightsbridge mall in Orchard Road.

The recruitment page on its Singapore website listed 14 new retail positions, including those for inventory specialists, service specialists and store leader.

News of the store's opening first broke last month after fitness club Pure Fitness sent an e-mail to its members that it was vacating its space in the mall to make way for the Apple Store.

Four other tenants at the mall - clothing shops Tommy Hilfiger, Topshop/Topman and Brooks Brothers, as well as watch retailer Dickson Watch & Jewellery - will also be moving out for this purpose.

Apple has confirmed that its own store will provide after-sales service such as repairs and diagnostics, currently provided through third-party contractors.

But the company declined to reveal the store's location and opening date, and how many people it is planning to hire.

Said Ms Angela Ahrendts, its senior vice-president of retail and online stores: "We have more than 900 incredible employees working in our Singapore contact centre and are thrilled to begin hiring the team that will open our first Apple Store in Singapore."