The wait for Apple fans will be over soon. Apple Orchard Road - the official name of the Apple retail store here - will be opening its doors on May 27 at 10am.

Close to midnight last night, workers were seen pasting the opening date on the white facade covering the front of the store at Knightsbridge mall.

It is not only the first Apple retail store in Singapore, but also the first one in South-east Asia. The store will open daily from 10am to 10pm.

News of the Apple retail store here first broke in October 2015, after a former tenant of the mall, the Pure Fitness gym chain, sent a letter to its members informing them of its closure to make room for the Apple store. Four other tenants were also moved.

In an exclusive interview during the opening of the Apple Dubai Mall store last month, Apple's senior vice-president of retail Angela Ahrendts told The Straits Times: "We want to be on an iconic street, where people will naturally come, whether they are locals or tourists."

This is especially so when it is the first store in the country and it allows Apple to build a beautiful signature store for that community, she said. 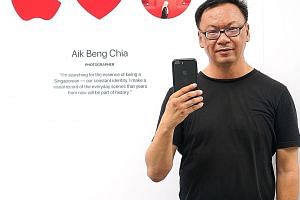 Retail experts said the Apple store's location makes sense. Said Associate Professor Prem Shamdasani of the National University of Singapore Business School: "For more than a decade, Apple has been opening retail stores in very good locations in major cities globally to showcase its great products and enhance the brand experience for loyal fans and consumers.

"Singapore's position as a vibrant and progressive global city in South-east Asia will help to reinforce Apple's brand leadership in the region," he said.

As of April, Apple has 495 retail stores in 20 countries.

Apart from selling Apple products such as iPhones, iPads and MacBooks, as well as accessories, the local Apple store will have staff who Apple calls Geniuses - technical personnel who specialise in troubleshooting and repairs of products.

Apple Orchard Road will also host hands-on sessions called Today at Apple, which launches in all Apple retail stores across the world this week.

Taught by Creative Pros, who are the liberal arts equivalent of Apple's technical Geniuses, these free educational sessions focus on the features of Apple products and allow anyone to learn skills like photography, illustration or coding.

For the Singapore store, Apple has appointed 12 Singaporean creatives as Red Dot Heroes. They are people who have made a contribution in their fields like the arts, photography, music or film.

They include street photographer Aik Beng Chia and illustrator Kristal Melson (see their profiles below), as well as film-maker Boo Junfeng and local singer Sezairi.

These Singaporean creatives are similar to Apple's Creative Pros and some of them will conduct workshops in Apple Orchard Road.

"When you want to control the store experience, you need to own and operate it," said Mr Clement Teo, principal analyst at market research firm Ovum.

"The bar for customer service in Apple stores and online is high, supported by trained Geniuses and expert advice from Creative Pros to help customers get the most out of their Apple products. Happy customers equal to loyal Apple customers," Mr Teo added.

Contrary to popular belief, Apple Orchard Road will not signal the end of Apple premium resellers (APRs) like Nubox and Epicentre, and repair centres such as QCD Technology.

"They (APRs) will continue to adapt and survive - especially in suburban areas," said Mr Teo. "Repair centres will be a great supplement to Apple for all sorts of warranty and repairs."

In fact, Prof Shamdasani said that the Apple retail store will enhance the brand's value and attractiveness and help to expand the market for Apple products and services in Singapore, which, in turn, will benefit the APRs and repair centres.

iPhone and MacBook user Chung Weifang is excited about the new Apple store here. The 33-year-old communications executive said: "There is nothing like buying a product from the brand's flagship store, where the customer experience begins the moment one steps into the retail space."

A version of this article appeared in the print edition of The Straits Times on May 17, 2017, with the headline 'Apple Orchard Road opening on May 27'. Subscribe
Topics:
More
Whatsapp Linkedin FB Messenger Telegram Reddit WeChat Pinterest Print Purchase Article Copy permalink