Apple continues to dominate Singapore's smartphone market, shipping the most number of phones here, after recapturing the pole position from Samsung a year ago.

The latest second-quarter data from market research firm IDC showed that Apple accounted for 38 per cent of the 1.1 million smartphones shipped to Singapore, compared with Samsung's 26 per cent share.

Strong demand for the iPhone 6 not only came from existing Apple users looking at buying new phones but from Android phone users switching over. Sales are typically slower in the first half of the year. This time, however, the exuberance lasted longer.

"Sales are typically slower in the first half of the year. This time, however, the exuberance lasted longer," she added.

Like consumers in the United States, Singapore buyers' love affair with Apple phones boils down to one thing.

Apple's rebound took place in the second quarter of last year, when it grabbed 34 per cent market share. Samsung trailed not far behind at 30 per cent.

A year before that, in the same period, Samsung had outpaced Apple to ship some 55 per cent of all smartphones to Singapore, leaving Apple with only 17 per cent of the market share. 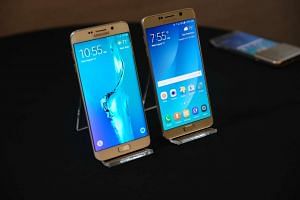 Samsung's new Galaxy Note 5 to go on sale on Saturday

The event responsible for tipping the scale in favour of Samsung was the launch of the South Korean firm's flagship smartphone, the Galaxy S4, in April that year.

Globally, however, Samsung has been shipping more smartphones than any company for four years now, although Apple is beginning to narrow the gap.

The battle for consumers' wallets is set to be more intense in the coming months.

Yesterday, Samsung launched its Galaxy Note 5 in New York, while Apple is slated to announce its latest phones next month.

It is believed that an earlier launch might give Samsung the first-mover advantage. But some analysts beg to differ.

IDC's Ms Kaur said: "Consumers may still want to wait for their contract to complete unless Samsung or the telcos have special plans for the launch."

Mr Matt Pollins, head of digital media at law firm Olswang, said competition also comes from Chinese vendors like Xiaomi and Huawei that have risen in prominence in recent months.

"They are eating up market share in China and, increasingly, overseas," said Mr Pollins.

IT consultant Nigel Tan, 28, said he uses a Xiaomi as his backup phone. "It is a cheap spare phone."