SINGAPORE - Mr Nishok is a passionate film-maker whose goal is to direct his first feature by the age of 35 while Ms Farren Tang is a cybersecurity analytics engineer with Singtel who is going back to school to sharpen her computing expertise.

Together they represent the diverse range of talent that the Infocomm Media Development Authority (IMDA) hopes to nurture through its inaugural Singapore Digital (SG:D) Scholarship.

Mr Nishok and Ms Tang were among the 81 recipients awarded scholarships on Thursday (Aug 1).

The SG:D Scholarship combines the four previously offered by the IMDA - the Infocomm Polytechnic, the National Infocomm, the Media Education and the National Cybersecurity Postgraduate scholarships.

IMDA received more than 1,000 applications for the SG:D Scholarship, up from about 600 across the four scholarships last year.

Mr Nishok, 23, was among the unsuccessful applicants last year but rejection turned out to be exactly the impetus he needed as he embarked on a flurry of activity knocking on doors, meeting other filmmakers and working on his own projects.

"In this line the rejection rate for festivals and film schools is around 90 per cent and it's not talent but hard work and perseverance that matters the most," he said.

"My mum told me she didn't mind me taking a gap year but I had to make sure I kept myself busy. And that was the first question I was asked during the (scholarship) interview this year, what I have been up to since I last applied." 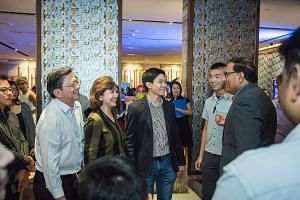 IMDA to double number of scholarships to 100

Mr Nishok is heading for the University of Westminster in London later this year to pursue a Bachelor of Fine Arts in film and production.

Ms Tang, 25, wanted to address a gap in her skillset after working for 18 months in the Singtel NUS Cybersecurity CorpLab as an analytics engineer.

She is a statistics graduate from the Nanyang Technological University and will undertake a Masters of Computing in artificial intelligence at the National University of Singapore.

"Working in cybersecurity with my R&D analytics team helped me realise that you need strong skillsets in both statistics and computing when dealing with big data," she said.

"I'm interested to see how things will evolve in the areas of automation and AI. That's where a strong computing background comes in as it will help me develop better algorithms."

Communications and Information Minister S. Iswaran told the awards ceremony at Marina Bay Sands that the digital economy creates opportunities for and needs talent in both the tech and non-tech sectors.

"The 200,000 infocomm media professionals employed in our economy are from both these sectors, from software engineers, to story-tellers, to data protection officers and game developers," said Mr Iswaran.

"What we are trying to nurture here is a deep, multi-disciplinary pool of talent for the infocomm and media industry."

He added that close collaboration between government and industry is crucial in developing such a talent pipeline.