She may be just 16 years old, but Quah Jing Wen has unquestionable sporting pedigree and is beginning to make a name for herself in the pool.

Last month, the swimmer took the first steps out of the long shadows cast by siblings Ting Wen, 25, and Zheng Wen, 20, when she was the Republic's top performer at the Commonwealth Youth Games (CYG), winning five golds and a silver.

The first gold she won in the Bahamas - in the 50m butterfly (in a personal-best time of 27.23sec) - was also Singapore's first at the CYG since 2004. The CYG contingent, comprising only swimmers, took home seven golds, four silvers and six bronzes in total.

Jing Wen's starring performance earned her The Straits Times Star of the Month award for July.

Said Jing Wen in a statement: "I am extremely happy and honoured to be presented this award. I am motivated by this and will continue working hard to achieve more successes."

Owing to her commitments at the SEA Games, which begin today, Jing Wen could not be at the lunch on Thursday, when sponsor 100Plus and ST presented the award. 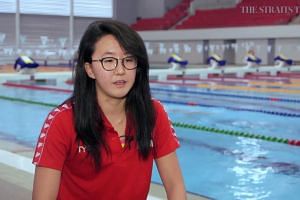 SEA Games: Jing Wen ready to rise to the top

STANDING OUT IN A TOP FIELD

She did very well in a field featuring swimmers from some very strong swimming nations like Australia.

"Jing Wen's performance at the Commonwealth Youth Games is a great stepping stone for her in the years ahead," Widmer said.

"She did very well in a field featuring swimmers from some very strong swimming nations like Australia."

Then, she swam in only one event (400m IM), winning a bronze, a performance which she is almost certainly set to improve on in KL.

Said The Straits Times' sports editor Lee Yulin: "These are exciting times for the Singapore swimming fraternity and I am glad to see that Jing Wen has come to the fore.

"We believe her achievements in the Bahamas are just the tip of the iceberg and we look forward to seeing her shine in years to come."

A version of this article appeared in the print edition of The Straits Times on August 19, 2017, with the headline 'Youngest Quah a star in own right'. Subscribe
Topics:
More
Whatsapp Linkedin FB Messenger Telegram Reddit WeChat Pinterest Print Purchase Article Copy permalink