Created by an American, aerial yoga with its hammocks has found its niche in Singapore

To the uninitiated, stepping into the Trium Fitness studio at Aperia Mall on a Friday afternoon might seem as if one has entered a casting call for Cirque du Soleil.

"Trust the hammock," instructor and founder Dawn Sim reminds her students in preparation for the next pose. She reassures them that each silk hammock can support a 250kg load.

Moments later, the class of 18 people is in midair, a metre above the ground, legs outstretched, bodies parallel to the ground, imitating Superman in flight.

The move dubbed the "rocket" is one of many poses unique to aerial yoga, made possible by the hammock suspended from the ceiling.

Aerial yoga or anti-gravity yoga is one of the later iterations of the ancient practice to hit Singapore's shores.

The brainchild of an American, former competitive gymnast and acrobatic dancer Christopher Harrison, aerial yoga was a way to combine his two loves - aerial performances and yoga - and their union created a new form of exercise.

The regimen draws inspiration from various fields aside from yoga such as Pilates, ballet barre, calisthenics as well as strength and conditioning exercises. Together with the effects of gravity and body weight, which are emphasised by the hammock, a full-body workout is achieved.

First introduced to Singapore in 2011, the exercise has since gained considerable traction, with several studios offering classes.

To cater to the growing demand, Trium has scheduled more classes and has also created an advanced aerial class.

Prices for a single group session at local studios range from $30 to $55.

Julian Poh, who practises at Trium multiple times a week, credits the exercise for whipping him into shape.

Besides providing a good workout, aerial yoga is also regarded by some as alternative pain-relief therapy for those suffering from musculoskeletal problems.

Practitioners to whom The Sunday Times spoke acknowledged that they notice the effects from aerial yoga rather quickly.

Michele Ong, who recently tried it for the first time, noticed the effects straight away. The 36-year-old portfolio manager has been plagued by back pain due to the nature of her job which involves constant travelling and long hours sitting.

She said: "After just one session, I could feel that my hip flexors were not so tight and my back pain disappeared."

Sera Tan, 38, who has been practising at Platinum Yoga weekly for about a year, explained: "You feel it (the effects) immediately.

"You don't ache that much (compared to other forms of yoga) if you do it properly. You'll sleep much better too."

The demographic of both studios is diverse, with people from different backgrounds and age groups, although Carolina Lee, Trium's studio manager, says most of its clients are PMETs (professionals, managers, executives and technicians).

At Sim's class, it is also evident that age is just a number.

Montessori educator Chiara De Silva, who is in her early 50s, was at her sixth aerial class, having attended regularly every week for the past month.

"Aerial is just so good for my body, it really stretches the muscles and relaxes me. It switches up my exercise routine and challenges my body," she said.

The exercise with a lift also attracted Sumedha Hore, who was so delighted with her first experience that she signed up for a 10-session package thereafter.

The 18-year-old communications and new media undergraduate at the National University of Singapore said: "I used to find other types of yoga boring because they require a lot of patience but this (aerial yoga) was really fun as I got to hang in the air."

Fun was not something Emmanuel Pelingon, a 31-year-old healthcare professional who practises aerial yoga once a week at Platinum, initially had in mind. He was apprehensive about aerial yoga at first because of his fear of heights but eventually managed to overcome it. He now uses it to complement his gym training.

"Building and strengthening muscle are two different things. You cannot get both at the gym," he said. 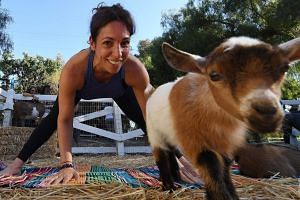 Yoga with goats craze takes off in US

He also refuted the claim that aerial yoga is easy, saying: "Once you're up there and inverted, you don't know where your legs are."