The air quality may have been "unhealthy" in many areas yesterday, but Singaporeans showed they were determined to remain a healthy and sporting lot.

Later, a Singapore Premier League (SPL) football match and a hockey tournament also went on, despite the reading remaining above 100 for much of the day.

Organisers of the two runs decided to proceed, having monitored the air quality levels leading up to the events.

A spokesman for the Yellow Ribbon Prison Run, whose longest distance was a 10km competitive run, told The Straits Times (ST) that organisers adopted measures in accordance with guidelines from the National Environment Agency (NEA).

Also, the PSI was not the only measure used.

"As the one-hour PM2.5 reading before the start of the run was within the normal range (32 to 53 at 5am), the event proceeded as planned," the spokesman said.

"Health and safety measures to assist participants included having medical personnel and ambulances on standby throughout the run route to attend to any injuries or medical needs."

PM2.5 readings, which the NEA said are a better indication of current air quality, measure the concentration of tiny particles less than 2.5 micrometres in diameter in the air. There are four bands on the PM2.5 concentration scale: from normal (0 to 55) to very high (above 250). 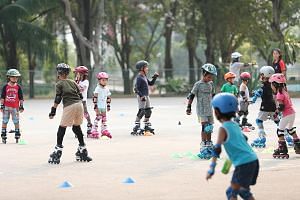 National marathoner Soh Rui Yong, who finished third in the Yellow Ribbon Prison Run, told ST: "I actually went to bed thinking that there was no way the run was going to proceed, given yesterday's haze.

"However, the conditions were much better today. Full credit to the organisers for holding out and monitoring the weather closely before making the call (for) participants."

Organisers of the POSB PAssion Run for Kids announced the decision to go ahead with the event as the PM2.5 readings at 4am were in the normal range (34 to 54).

Participant Leung Wai Wang said: "POSB updated us every few hours prior to the event and reassured us that our health would be taken care of. I believe they were monitoring the situation and we felt safe... there were staff along the (route) every 200m or 300m."

Yesterday evening's SPL match between Hougang United and Geylang International also kicked off as scheduled at 5.30pm at Our Tampines Hub, despite the 24-hour PSI reading at 5pm yesterday registering 100 to 108.

According to Football Association of Singapore guidelines, SPL games will be delayed, suspended, or postponed - depending on officials on the ground - only after 24-hour PSI readings hit 200.

The threshold for amateur matches, like National Football League games, is 100.