The victory ceremony is going on and Pradip Subramanian doesn't have much time to live. No one knows it then but a strong man's heart is about to fail him on a carefree evening. Even two days later, to see the video of his young, limp body being bundled from the ring on Saturday is deeply distressing. The only loss in sport, after all, is supposed to involve defeat, not death.

Fatalities in sport are not unfamiliar and yet they are always surprising. On the field and in a ring we come to witness vitality and so the reverse is bewildering. Cricketers are struck by a ball and fall and riders tumble from horses. Cyclists perish, footballers collapse and even Jim Fixx, author of The Complete Book of Running, died of a heart attack at 53 while jogging.

And yet somehow this is different because combat sport is different - a sort of sporting species like no other. In football, inflicting pain is not the purpose, but it is here. In cricket, looking to leave a man unconscious is not the plan, but it can be here.

As MacDonald Critchley, a neurologist at London's King's College Hospital, wrote in a 1957 paper on boxing (which could be equally applicable to muay thai): "One important distinction, however, distinguishes boxing from most other forms of athleticism. Injuries are coincidental in other sports, but in boxing the aim and object is to render the opponent hors de combat."

If you look at the origin of sporting cliches which deal with bravery and violence and toughness, so many arrive from combat sports. "Down for the count". "Knockout punch". "Go down swinging". "Fighting chance". "Blow by blow". Other sports borrow them because they know this place, the ring, the cage, is real, it's raw, it's more unforgiving than anything they do. It is never to be taken lightly.

And so Pradip's passing is particularly tragic because we wonder if it was preventable. It is death seemingly born of the misunderstanding that combat sport is somehow fun. It never is. People play tennis and they play golf, but you cannot play boxing and you do not play muay thai. This is not a playful pastime but always a high-risk activity. 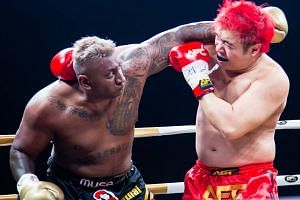 Any fighting, in any form, is tiring, for every punch and kick and elbow thrown takes energy. In the ring we see muay thai fighters move fluidly, all smooth menace, but we can't see the exhaustion slowly burning into their bodies. "Try shadow boxing for three minutes and you'll find it difficult to keep your gloves up," says Dr Cormac O'Muircheartaigh, a sports medicine physician and director of Sports Medicine Lab.

If you play football after years of inactivity you risk a strained hamstring, but combat sports don't always let you escape so cheaply. A single blow even from an untrained pugilist, says O'Muircheartaigh, can lead to "a concussion, an intracranial bleed, a rib fracture or collapsed lung".

The hands fall, mistakes happen. Says former Singapore boxer Syed Abdul Kadir, a Commonwealth Games medallist, who has been there, in the heat of the middle: "Three minutes can feel like three hours and you can be waiting for the bell to ring. And when you're tired a lot of things can happen."

When Conor McGregor, a trained, fit martial artist, fought Floyd Mayweather over a longer distance than he is used to, he was winded and admitted to fatigue. When Amir Khan, the British boxer, readies for a fight his training camp lasts 12 weeks. When Pradip, a bodybuilder, signed up, he reportedly had one day to prepare. Doesn't matter if it was a two-round carnival duel, it was just not enough time to teach a man the most basic skill of this art form: Defend Yourself.

The fight resembled a bar brawl, a gimmick with gloves, a sport not adequately respected. If you play football after years of inactivity you risk a strained hamstring, but combat sports don't always let you escape so cheaply. A single blow even from an untrained pugilist, says O'Muircheartaigh, can lead to "a concussion, an intracranial bleed, a rib fracture or collapsed lung".

May Ooi, 41, the mixed martial artist, tells me that even while sparring she uses headgear and shin pads. Both men did not. They were amateurs asked to pose as professionals. But in a ring, she says, "it's not a joke. You can't play in there".

There is a mythology to combat sports, a manliness which is always paraded, an adoration of violence and hard-luck tales which is presented in movies such as Cinderella Man, Rocky, Raging Bull and Million Dollar Baby. There will always be an attraction to this sport, a sort of primitive pull, but we've got to be smart and serious about it.

We've got to lay out all the risks for fighters, even for exhibitions. Got to teach them and train them, or as Kadir says, "make sure you understand the sport". Got to have strict medical guidelines and remind them that getting hit is never fun. Got to never forget that a young man's life is more precious than any evening's casual entertainment.

A version of this article appeared in the print edition of The Straits Times on September 26, 2017, with the headline 'Tragedy in the ring reminds us combat sports are never a lark'. Subscribe
Topics:
More
Whatsapp Linkedin FB Messenger Telegram Reddit WeChat Pinterest Print Purchase Article Copy permalink