Singapore Athletics has come under fire following a dismal outing at the 30th SEA Games and reports of discord within the squad.

In the post-mortem of Team Singapore's performance yesterday, Richard Gordon, head of high performance and athlete life at the Singapore Sport Institute (SSI), said: "Swimming and athletics form the two core sports in the programme.

Noting athletics' decline in results over the past three Games, Gordon said the sport, which has a "propensity for infighting in the past two to three years", has to "get its act together".

He said: "Singapore Athletics and the fraternity have a role to play in ceasing the infighting to focus on the athletes. This is taking time, effort and energy away from what they should be doing. This is not fair for the athletes. If this culture persists, progress is challenging."

In contrast, swimming was Singapore's top performer among the 48 sports - with 23 of the 53 golds.

Urging other sports to learn from the Singapore Swimming Association, Gordon pointed to its "systematic approach" to training in the form of its national training centre and stability in governance.

At the press conference, the Singapore National Olympic Council (SNOC) noted this is the third successive Games Singapore had won more than 50 golds. They also had 46 silvers and 68 bronzes.

Fifty-six per cent of the contingent of 659, or 366, and seven sports (beach handball, underwater hockey, e-sports, surfing, sambo, kurash and skateboard) made their debut.

It was an exhilarating Games, and our athletes have done us proud in many areas.... Our athletes have also taught us resilience in the face of adversity and disappointment - to hold your head up high when things do not go as planned, because you know you have given your best.

Singapore were sixth in the medal tally topped by hosts the Philippines with 149 golds, followed by Vietnam (98), Thailand (92), Indonesia (72) and Malaysia (55).

Sports like swimming, fencing, ice skating and golf earned praise while football came in for criticism on and off the pitch.

The Young Lions made the headlines when nearly half the squad of 20 had broken curfew during the tournament, where they scored their first goals only in the fifth and final match.

Gordon noted that, despite the Under-22 team's "comprehensive preparations", they did not do well and the SSI would "look into what went wrong".

The SNOC and SSI also noted the "erratic" performances of sports such as water polo, where the men were beaten to gold for the first time, and table tennis, which took two of four golds. 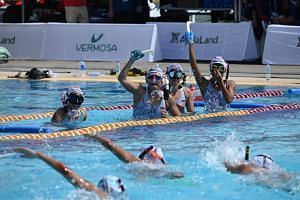 Gordon said: "Many of the traditional sports, perhaps they have lost some innovation, perhaps they've lost a little bit of desire, are being challenged by some of the emerging new sports." While there were transport, infrastructure and food issues ahead of the opening ceremony, Juliana Seow, Singapore's chef de mission, said the organisers responded very quickly to resolve them.

She added: "Overall, Team Singapore had a great outing.

"Our athletes displayed grit and persevered in competition among the region's best.

"Even the typhoon (Kammuri) wasn't able to dampen the strong team spirit. Singapore's results show plenty of promise and, hopefully, the national sports associations will continue to ride on this positive momentum."