Local combat sports promoter Willip Ho once attended a boxing event where one fighter, with 13 professional fights under his belt, took on a debutant.

"All I could think was: How could this match have taken place?" says Ho, who also runs the Fight Pro-Motion gym in Joo Chiat Road.

"If Singapore had a commission, they would have been aware of the fighters' records and that fight would not have happened.

"But right now, the responsibility is in the hands of only the promoters."

Indeed, many in the local professional combat sports scene believe it is time for a regulatory body in Singapore to oversee professional boxing and mixed martial arts (MMA), which has enjoyed a rise in popularity and participation over the last three years.

In the United States, for example, various states have athletic commissions that regulate unarmed combat contests. 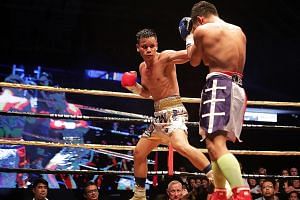 The bodies' functions include the licensing of promoters, boxers, kickboxers, MMA fighters and officials in those states.

In the boxing-mad Philippines, the Games and Amusement Board plays a similar role as a regulatory authority.

In Singapore, pro boxing events are usually sanctioned by an international organisation, such as the World Boxing Association, and follow that organisation's guidelines. There are no sanctioning bodies for local MMA fights.

The shock death of bodybuilder Pradip Subramanian in a celebrity muay thai fight in September 2017 had led to calls for greater regulation and safety guidelines.

A month after the tragedy, Minister for Culture, Community and Youth Grace Fu said in Parliament that MMA contests "tend to be organised as part of commercial entertainment events owned by private promoters, where the sanction that the sports governing bodies can effectively bring to bear is curtailed".

Another boxer, Alexandrew David, adds it would allow only qualified people to be licensed as promoters to take boxing and MMA forward.

But Arvind Lalwani, a promoter, warns that the "right people" need to be put in place if such a body were to be formed; a point echoed by other promoters like Ho and Scott O'Farrell from Ringstar Asia.

"If the wrong people are in place, it could become a money spinner," says Lalwani, who created the Singapore Fighting Championships, a multi-combat sport event, in 2014.

"For example, they might decide to introduce licences you need to pay for, to hold certain shows.

"And if there's such a thing where this person likes that guy, that person supports another...

"That would be no good for the scene."

A version of this article appeared in the print edition of The Sunday Times on March 24, 2019, with the headline 'Time ripe for a commission?'. Subscribe
Topics:
More
Whatsapp Linkedin FB Messenger Telegram Reddit WeChat Pinterest Print Purchase Article Copy permalink