WELLINGTON (REUTERS) - Parents normally tell their teenagers to watch their language, but Coco Gauff turned the tables on her father on Thursday (Jan 9) during her second round clash with Laura Siegemund at the Auckland Classic.

The 15-year-old Gauff had taken the first set off the German and was receiving some coaching advice in the changeover from her father, Corey, about what she should do to ensure she advanced to the quarter-finals.

"The one thing you did ... you didn't give out no free points on her damn serve," Corey Gauff told his daughter as a television microphone picked up the conversation.

"You can't curse," she replied with a deadpan look on her face.

"I cursed?" an incredulous Corey asked.

"You said the D-word," his daughter retorted as a smile spread slowly across her face.

"Oh, that one doesn't really count," he quizzically replied.

"In some places it does," she admonished him.

The playful banter, however, failed to spark Gauff, who had been inconsistent in the first set and the 31-year-old German capitalised to win the match 5-7, 6-2, 6-3.

Gauff told reporters that she felt she still had a lot to learn from playing at the top level, but that her basic game was there to build on.

"I don't think there was much missing," Gauff said.

"I just told my dad that I didn't feel like I was hitting my shots like I normally do.

"That just happens, you have bad days, you can't play your best tennis every day." 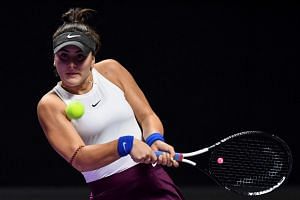 Tennis: Bianca Andreescu out of season opener in Auckland with 'knee issues'

Meawnwhile, Serena Williams rallied from a set down to beat journeywoman Christina McHale but said it was just the workout she needed.

With her focus on winning a 24th Grand Slam at the Australian Open, Williams said she needs all the court time she can get after a long off-season since losing September's US Open final.

It took the top seed two hours to put away the 27-year-old McHale and advance to a quarter-final with Siegemund in the second round.

Williams was broken three times before losing the first set 3-6 but recovered to take the next two sets 6-2, 6-3 in the all-American affair.

"I really need to play matches like that to get to my goals," said the 23-times Grand Slam winner, who is determined to equal the record of 24 held by Australian great Margaret Court.

"Tournament time is super-important, match time is good. After losing that first set I'm just glad to be still in the event."

McHale used her speed around the court in extended rallies which often produced unforced errors from the 38-year-old Williams in the early stages.

But just as it looked as if Williams was in a slump at 1-4 down after five games, the world number 10 got to grips with the blustery conditions and McHale's agility and began to take control.