Carreno Busta, the first player in Grand Slam history to face four qualifiers, ended a dream run for 18-year-old left-hander Shapovalov, who would have been the youngest US Open quarter-finalist since Andre Agassi in 1988.

Carreno Busta, 26, has not dropped a set this week in advancing into a Tuesday matchup for a semi-final spot against the later winner between French 16th seed Lucas Pouille and Argentine 29th seed Diego Schwartzman in a draw half assured of a first-time Slam finalist.

"It's amazing," the Spaniard said. "I cannot describe it. I'm enjoying because I'm in quarter-finals."

Carreno Busta won his third career ATP title in May on Estoril clay then reached his first Slam quarter-final at the French Open, where he retired against Rafael Nadal with an abdominal injury that kept him out of Wimbledon.

Shapovalov was dominated in tie-breakers to ruin his bid of becoming the youngest Slam quarter-finalist since Michael Chang at the 1990 French Open and first US Open qualifier in the last eight since Gilles Muller in 2008. 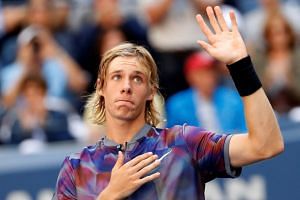 Tennis: Shapovalov youngest man in US Open last 16 since 1989

Shapovalov, who lost his Grand Slam debut at Wimbledon, will jump from 69th to about 51st in the world rankings after the Open.

The match began under the Arthur Ashe Stadium roof on a damp, dreary day on the New York hardcourts.

Carreno Busta denied Shapovalov on two break points in the second game but surrendered the break in the sixth game.

The Spaniard broke back when Shapovalov served for the set in the ninth game and denied three set and break points in the 12th to reach a tie-breaker he dominated, claiming the set when the teen swatted a forehand long.

Carreno Busta broke to lead 3-1 in the second set, saved a break point in the fifth game and served for the set in the ninth, only to be broken by Shapovalov, the teen screaming and pumping his first after an overhead smash winner to led to another tie-breaker. 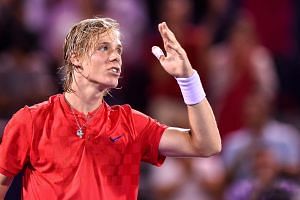 The Spaniard roared ahead 4-1 in the tie-break and Shapovalov dropped three of the last four points to fall two sets down.

Shapovalov exchanged early third-set breaks with the Spaniard on the way to the final tie-breaker, in which he fell behind 5-1 and never recovered.

Later men's last-16 matches pitted South African 28th seed Kevin Anderson against Italy's Paolo Lorenzi and Germany's 23rd-seeded Mischa Zverev against US 17th seed Sam Querrey, whose July Wimbledon semi-final run is the deepest by anyone on his side of the draw.

Maria Sharapova, making her Grand Slam return after serving a 15-month doping ban, was to face Latvian 16th seed Anastasija Sevastova later on Ashe with the winner to play either American Sloane Stephens or Germany's Julia Goerges for a semi-final spot.

Wimbledon and Australian Open runner-up Venus Williams, the US ninth seed seeking her eighth Grand Slam title and third US Open crown, was to meet Spain's Carla Suarez Navarro for a quarter-final spot.

Wimbledon champion Garbine Muguruza, the third seed from Spain and leader in a fight for world number one, was to face Czech 13th seed Petra Kvitova later.