Cilic, who won the 2014 US Open, broke the American twice to win the first set but found himself adrift in the second as Sock levelled the round-robin match with two breaks of his own.

In a see-saw deciding set, the Croatian fifth seed started quickly and raced to a 3-0 lead before Sock, the eighth seed, steadied himself, cancelling out the break.

The match then settled back on serve and went to a tie-break. Although Cilic edged ahead 4-2, Sock held his nerve, winning five points in a row to seal the victory.

“That was a tough one for sure,” said the American.

“It’s been an interesting morning so far. The fire alarm went off at 4am and we had to exit the building. But I love playing here in London. It’s an amazing atmosphere, you make me feel like home.

“I’m just excited to win and keep myself alive.” 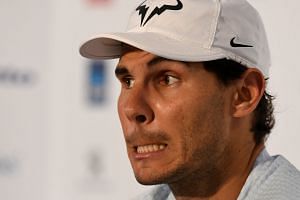 Sock, the American number one, came from nowhere to reach the end-of-season event, reaching London by winning the Paris Masters – and breaking a run of European success at Masters events stretching back to 2010.

This week, Sock lost his first match in the Boris Becker group to Roger Federer while Alexander Zverev beat Cilic, leaving both fighting for their lives on Tuesday.

The top two players from each of the two groups of four will progress to the semi-finals.

Later, the crowd will be treated to the latest episode in the cross-generational rivalry between Federer and Zverev, with the tournament desperately needing a compelling story after the withdrawal of world number one Rafael Nadal.

The Spaniard quit the tournament on Monday after losing his opening match in the Pete Sampras group to David Goffin.

Federer, 36, and Zverev, 20, have faced each other four times and each has won twice. This year, the Swiss world number two beat the German in Halle but Zverev returned the favour at the Rogers Cup in Montreal.

The ATP Finals feature the top eight fit male singles players and doubles teams who have accrued the most points throughout the 2017 season.