SHANGHAI (AFP) - Roger Federer warned temperamental Australian Nick Kyrgios on Tuesday (Oct 9) that he would never fulfil his potential without the work ethic to go with his talent.

The 23-year-old Kyrgios made another contentious exit from the Shanghai Masters on Monday after a running argument with the chair umpire who suggested his efforts were "borderline".

It is the third time in as many Shanghai appearances that Kyrgios has departed the Masters 1000 event under a cloud.

Speaking in Shanghai, where Federer is the top seed and reigning champion, the 37-year-old Swiss great called Kyrgios "a great player".

But he also sounded a note of caution.

"I think it's really up to him where he wants to go and what his potential really holds," said the 20-time Grand Slam winner.

"We don't really know and I don't think he really knows exactly what his potential is.

"And only through understanding work ethic and scheduling and whatever it might be, creating the right team around himself, only then can you unlock the potential really."

Kyrgios, who this week lost his status as Australia's No. 1 to 33rd-ranked Alex de Minaur, has a chequered history in Shanghai.

Last year he was fined after he walked off midway through his first-round match, and in 2016 he was suspended and fined after being accused of giving away points in another defeat.

Federer, who admitted that the hard graft did not necessarily come naturally to him either, backed Kyrgios to "win bigger tournaments and do all these things".

"But there is still a process in place that he needs to do like any other player needs to go through in order to be successful," he added.

Shanghai is not the only scene of a Kyrgios controversy. 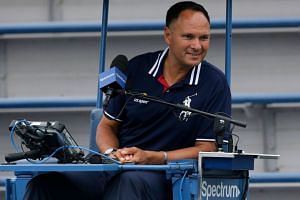 Tennis: Umpire who gave pep talk to Kyrgios at US Open suspended by ATP

Federer dishes out masterclass to Kyrgios

At the recent US Open, a disinterested Kyrgios was given a controversial mid-match pep talk by an umpire as he drifted towards a second-round defeat.

"I want to help you," chair umpire Mohamed Lahyani told Kyrgios, who went on to capture 19 of the next 25 games and set up a clash against Federer in New York.

Australian doubles great Todd Woodbridge said the scheduling of Shanghai, a compulsory tournament at the tail-end of the season, seemed to be a problem for Kyrgios.

"Nick plays his best tennis when he's fresh, when he's enjoying himself and he's engaged," said Woodbridge, according to the Melbourne Age.

"When he has to go somewhere and that isn't the case, we see him a little jaded and we see him play the way that he did... Scheduling is huge for him. He gets tired and then it's regrettable for him."

Kyrgios made no initial public comment after his defeat by qualifier Klahn, but has previously spoken of his intent to learn from Federer.

"I think we're two very different characters," said Kyrgios following his loss to the Swiss at the US Open.

"But I think, you know, just the way he goes about things, I could take a leaf out of his book."