PRAGUE (REUTERS) - Roger Federer won the inaugural Laver Cup for Team Europe on Sunday (Sept 24), beating back a fierce challenge from players from the rest of the world to claim the trophy in a dramatic final match of the weekend.

Despite cruising through the first two days, the Europeans needed the last match to finalise the victory and show the dominance expected from a team featuring five of the world's top seven players.

Federer delivered in a tight 4-6 7-6(6) 11-9 win over world number 20 Nick Kyrgios, with the Australian pushing to the final point as he sought a win that would have forced an overtime doubles match to decide the tournament.

But Kyrgios squandered a chance at match point and then smashed the ball into the net to end the battle, spurring Federer's European team mates, led by top-ranked Rafael Nadal, to leap off the bench and embrace the Swiss at the net.

"I was ready to go. I had to be. That is what a team member does. The boys played fantastic all weekend but we knew it could change very quickly on Sunday," Federer said. "I was looking at getting ready maybe for doubles at the end... But I got it done."

An earlier victory from big-hitting German Alexander Zverev also helped fight off the last-day comeback from Team World, which entered the day 9-3 down after dropping six of the first eight matches. 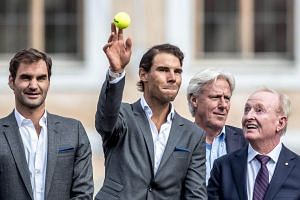 With matches worth three points on Sunday - versus two on Saturday and one on Friday - the group battled back with Americans John Isner and Jack Sock downing Croatian Marin Cilic and Czech Tomas Berdych, who was playing in front of the hometown crowd at Prague's O2 Arena.

Zverev, the youngest player in the top 10 at age 20, then faced Team World's highest ranked player at number 16, Sam Querrey. He broke the American's serve midway through the first set and never looked back en route to a 6-4 6-4 win.

That left Nadal to face Isner, winless in six career meetings with the Spaniard. But the world number 17 rattled Nadal from the beginning and delivered a barrage of 23 aces and several forceful winners and drop shots. "I walked to the court like I had absolutely nothing to lose and I just went for it," Isner said.

Federer then played hero, battling back after dropping the first set to Kyrgios who had looked to keep Isner's giant-killing momentum going.

The Laver Cup, named after Australian tennis hero Rod Laver, has won plaudits from the players. Matches were close despite fears they would be little more than an exhibition.

Federer and Nadal, the game's top two players who split this season's four grand slams, teamed up on Saturday, putting aside a long-running rivalry to play doubles competitively for the first time, giving fans an eagerly anticipated treat.

With next year's play moving to Chicago, a John McEnroe-captained Team World will look to bounce back against Bjorn Borg's Team Europe. "We were so, so close to pulling this off," McEnroe said.