NEW YORK (AFP) - Maria Sharapova made the US Open last 32 Wednesday, insisting she has instilled renewed fear into her rivals and rekindled the love from her fans.

It was her second three-set match, having seen off world number two Simona Halep on Monday in what was her first Grand Slam match since being hit with a 15-month doping ban.

"I think with the way that I played Monday night, I don't think there are any more questions," said the 30-year-old when pushed on whether her spot in the tournament was justified.

The 2006 champion, and guaranteed arena-filler, needed a wild card to play in New York after her prolonged absence from the sport had left her with a world ranking of 146.

It was a decision widely criticized with many insisting she should work her way back into the main draw and not be given a helping hand. 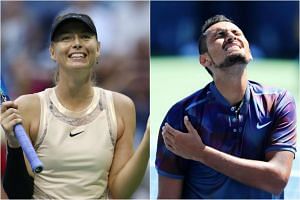 Tennis: Sharapova battles on while Kyrgios crashes out at US Open

"I definitely feel the respect from the athletes," Sharapova insisted.

"Certainly when I play against them, in terms of the level they play. That's important to me. I think from a respect level, when you're able to respect your rivals and compatriots, that's really important, and I feel that." "I've also had an amazing reaction from fans since I've been back, and that's been very special. I felt it while I was away. I felt it in a real presence since I've been back. It's a very special feeling." But the questions over the ban, imposed when she tested positive for meldonium at the Australian Open in 2016, still keep coming.

After her win over Babos, she was asked how many times she had been drug-tested this year.

"At the end of the year, the ITF usually produce those numbers," she fired back.

Sharapova's return was still splitting fellow players on Wednesday even as her marketing appeal was evident in playing back-to-back matches on the showpiece Arthur Ashe stadium.

"I've been always supportive to Maria. For her it has been tough. She paid for her mistake," said Kuznetsova.

"It's great to have her back because tennis misses her. Tournament directors, people around, they love to watch her play. You can see after her first match how the crowd welcomed her back." However, Coco Vandeweghe said the wild card should have gone to an American player.

"Wild cards are appointed by the USTA. I can't say I agree. I wish it was an American instead, selfishly, because it is a USA tournament," she said.

No money for Sharapova foe

Sharapova will look to reach the last 16 on Friday when she faces Russian-born American Sofia Kenin, the world 139.

Win or lose, 18-year-old Kenin will be none the richer as her amateur status means she cannot claim the $144,000 prize money at the risk of losing a place on her college squad.

But Kenin said she is still looking forward to the challenge of facing Sharapova, her childhood idol.

"I have looked up to her all my life, she's a great player," said the teenager.

"I am really happy she's back. I have a lot of respect for her."