Briton Murray and his brother Jamie, in their first doubles event since the 2016 Rio Olympics, lost to New Zealand's Michael Venus and South African Raven Klaasen 6-7 (3-7), 7-6 (8-6), 10-7 in the quarter-finals at the US Open tune-up event.

Murray has practised singles this week to improve his conditioning after the long layoff.

"I feel fine," he said. "Practice has been fine. No issues physically. So progressing well. Just keep practising the next 10 days or so and see what happens."

"Once you're in a certain position for a long time, you really crave for more," he said.

"This one position difference might not feel a lot for some people but for me it really means a lot because there has been a lot of hard work behind it, just a lot of suffering in general.

"I feel I deserve this position. It means a lot for sure."

"I'm excited to play him," the combative Australian said of Tsitsipas. "He's one of the best players in the world right now."

Murray, who feared his career might be over after the January operation, has not played singles since the Australian Open but says he might return at the ATP Cincinnati Masters starting Aug 12.

"If I feel like I'm ready, I'll give it a go. If not, I'll wait probably until after New York. But so far it has been fine." 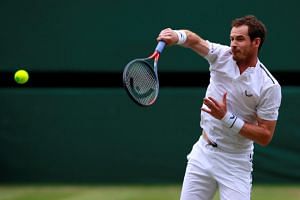 Murray, set to play doubles next week at Montreal alongside Spaniard Feliciano Lopez, does not want his first singles matches back to be the best-of-five-set variety offered in Grand Slams.

He ruled out playing in Winston-Salem the week before New York, figuring he would be better off practising for a post-US Open return.

"I've never competed the week before a Slam," Murray said. "If I'm not ready five or six days beforehand, I'm assuming that I'll probably just give it a miss."

Far from a 'shoe-in'

Tsitsipas' victory was marked by his third straight game with a delay to change left shoes, having said he damages the laces when he slides incorrectly.

"There's nothing I can do about it," he said. "The only thing is probably change my footwork, stop doing that."

Paire, irked by the unexpected stoppage, complained to the umpire to no avail.

"In a way he was right," Tsitsipas said. "It has happened many times in the past. I've been struggling with it.

"It's very irritating for me to keep playing with a shoe that's not tight. It can fall off at any moment during the rally. Once in Barcelona it happened."

Later, Paire halted the match to make his own shoe change, giving the umpire a mournful look as he pointed to his left shoe while walking to his chair in what appeared to be a protest.

Medvedev, chasing his fifth career ATP title, took the only break at the start and never faced a break point.

"I managed to do what I had to do, hold my serve and win the tie-breaker," Medvedev said. "I'm really happy with my level of play."

Gojowczyk, who only made the event after Australian Bernard Tomic dropped out with a finger injury, won his only title in 2017 at Metz.

The Americans will face the No. 4 seeds, American Maria Sanchez and Fanny Stollar, on Saturday.

Gauff, the 15-year-old who reached the fourth round at Wimbledon, and the 17-year-old McNally were given a wild card into the tournament. Their victory came after McNally returned to the court after pulling off the latest upset in the women's singles field, which has no seeds in the final four.