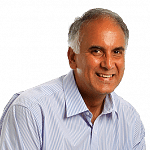 There is no compelling reason for John McEnroe and Serena Williams to play each other, despite his frank assertion last week on the Jimmy Kimmel show: "I believe that I could still take her."

Having covered part of McEnroe's most dominant years, I can tell you that he was always honest, blunt and perceptive, especially in assessing his own performance.

So yes, in terms of his statement to Kimmel, he undoubtedly believes that he still has the shots, the guile, the overall court control, and even the fitness, to beat Williams. That's some confidence.

Would a Williams vs McEnroe match be good for the winner's ego? Yep, bragging rights for life. Would it be good for the bank balance? For sure; it would redefine the phrase "laughing all the way to the bank".

But would it be good for their respective legacies? No, because both champions have far too much invested in their records to allow them to be possibly eroded or partially overshadowed by a frivolous contest with no deep meaning.

So, on to the next question: Would Williams vs McEnroe be good for the game? Not particularly - tennis has moved seamlessly into the 21st century and does not need a one-off carnival sideshow such as this.

Historically, there is no real parallel with the two Battle of the Sexes matches in 1973, of which the second - when Billie Jean King easily beat 1939 Wimbledon men's singles champion Bobby Riggs 6-4, 6-3, 6-3 - reportedly drew a staggering TV audience of 90 million.

Back then, the matches were a big deal. The feminist movement was at its height and the nascent women's professional tennis circuit was struggling to achieve commercial viability in an era when equal prize money for both sexes was still a distant dream.

But now, women's tennis has evolved to the point where there is no broad meaning in a man vs woman contest.

Having said that, seemingly mismatched or asymmetrical contests have always had a certain appeal through history. It is why, in the amateur era, a supreme athlete like the late Jesse Owens, who created history when he won four track and field gold medals at the 1936 Olympics, later ran and won contests against racehorses, in order to help pay the bills.

Even when money is removed from these asymmetrical contests, they still have a certain mathematical and scientific appeal. In 1981, the late Canadian Formula One driver Gilles Villeneuve raced a Ferrari 126 against a US-built F-104 fighter jet over 1km and won.

The concept was revisited in 2003, when Michael Schumacher also raced a slightly modified Ferrari F2003-GA against a Eurofighter Typhoon of the Italian Air Force in a series of three races across varying distances. The car beat the jet across 600m, but lost in the 900m and 1.2km races.

So yes, asymmetrical contests have taken place before and they will continue to do so. It is precisely why undefeated UFC bantamweight champion Ronda Rousey wants one.

Two weeks ago, the 28-year-old predicted during a question-and-answer session on Reddit that she would win a no-rules fight against Floyd Mayweather, 38, who holds world titles in five different weight categories.

Saying that she would be invincible in an anything-goes fight, she had no hesitation in throwing down the gauntlet to Mayweather: "Floyd is one of the best boxers of all time. He would definitely beat me in a boxing match (but) in a no-rules fight, I believe I can beat anyone on this planet."

Just as Mayweather has not replied to Rousey, Williams has so far not responded to McEnroe. Right now, the US Open and the prospect of a rare calendar Grand Slam (winning all four Majors in the same year) is undoubtedly her sole focus.

Were she ever to consider it, though, the appeal of such a Ripley's-meets-Ringling Brothers Circus contest would be purely commercial.

If Williams and McEnroe signed on the dotted line, it would lead to a bidding frenzy for the television rights. Perhaps not on the scale of the title bout between Manny Pacquiao and Mayweather, but it would be a big-ticket event for any network looking to boost its share price.

Interestingly, discussing a man vs woman contest is not a taboo subject for Williams. She weighed in to the debate two years ago when there was talk of playing against dual Grand Slam winner Andy Murray.

"I'd be up for it" said Murray in June 2013, before Wimbledon. "I've never hit with her, but she's obviously an incredible player and I think people would be interested to see the men play against the women to see how the styles match up."

Three months later, on the David Letterman show, Williams was disarmingly frank about her prospects - or lack of them - against Murray: "I'm like, 'Andy, seriously, are you kidding me?'

"For me, men's tennis and women's tennis are completely, almost, two separate sports. If I were to play Andy Murray, I would lose 6-0, 6-0 in five to six minutes, maybe 10 minutes. It's a completely different sport. The men are a lot faster and they serve harder, they hit harder, it's just a different game….. So Andy, stop it. I'm not going to let you kill me."

After robust pre-match negotiations, Connors agreed that he would have only one serve on each point and Navratilova would have the added benefit of hitting into a slightly wider area than a traditional singles court. Connors won 7-5, 6-2 and Navratilova later said: "I felt more that I lost the match than Jimmy won it".

In overall context, therefore, there would be no real winner in a Williams vs McEnroe confrontation - unless both players agreed to donate their purses to charity. Williams' dominance against her peers is all that matters when she is judged in tennis history - not the footnote of whether or not she is able to beat 56-year-old McEnroe.