Before failing a dope test at the Australian Open, Maria Sharapova reportedly failed to heed messages from the authorities that the drug she was taking had been added to the list of banned substances. She now faces a lengthy suspension

LOS ANGELES • Maria Sharapova was warned by the tennis authorities no fewer than five times in the month before she failed a doping test, that the drug she was taking had been added to the list of banned substances.

The 28-year-old is facing a lengthy suspension after testing positive for meldonium at the Australian Open in January.

The Russian, who disclosed the positive finding at a news conference on Monday, claimed that she was unaware that the drug had been included on the World Anti-Doping Agency's (Wada) banned list on Jan 1. But it can be disclosed that during December, there were five separate communications to tennis players, including her. 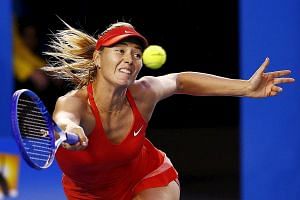 There were three correspondences from the International Tennis Federation (ITF) and two from the Women's Tennis Association (WTA), all containing warnings that meldonium - which is also known as mildronate - was to be banned. Wada had also given notice of the fact as early as September.

The communications included "wallet cards" listing banned substances on Dec 3, a link to the latest documents posted on the international federation's website on Dec 7 and a further notification from the women's association on Dec 11.

On Dec 22, players were provided with another link via e-mail - which was referred to by the former world No. 1 in her press conference - and there was a final reminder by the WTA on Dec 29.

When asked about the four other communications, Sharapova's management team responded with a statement: "Whether it was one notice of some kind or more than one, Maria has already acknowledged she should have known. She makes no excuses for missing it."

There remains unanswered questions, however, including whether Sharapova had listed meldonium on doping control forms when she had given samples in the past.

The five-time Grand Slam champion also revealed that she had been using meldonium for a decade. She said she took the heart medicine - which is not licensed in the US - since 2006 after health problems including regular sicknesses, early signs of diabetes and "irregular" results from echocardiography exams. But the manufacturer, Grindeks, has said that the normal course of treatment was only four to six weeks.

"Depending on the patient health condition, treatment course of meldonium preparations may vary from four to six weeks," a spokesman from Grindeks said.

"Treatment course can be repeated twice or thrice a year. It is not to be prescribed to treat diabetes. Only physicians can follow a patient's health condition and state whether the patient should use meldonium for a longer period of time."

There is also evidence that meldonium has long been known to boost performance in sport, increasing blood flow to the heart and muscles and helping to enhance aerobic capacity. Ivars Kalvins, the drug's inventor, contributed to a research paper in 2012 that even spelt out the gains to be had and, helpfully, revealed the ideal dose for athletes as "0.5g-1g twice a day before training, a 14-21 day course during training period and 10-14 days before competitions".

The ITF said that Sharapova had been informed of the positive test on March 2 and she will be provisionally suspended from Saturday.

The world No. 7 could theoretically face a four-year ban but her legal team intends to argue for a much shorter suspension. The feeling in the Sharapova camp on Tuesday was that a ban of one year or less was achievable.

"Maria and I are looking at all our options," said John Haggerty, the player's lawyer. "Unfortunately, we are not allowed, because of the confidential nature of the process, to discuss any efforts we may be taking in connection with that process."

According to American sports lawyer Paul Greene, one option for Sharapova is to apply retroactively for a therapeutic-use exemption for meldonium, which would be based on her long-term medical usage. If approved, it could absolve her.

The normal adjudication procedure calls for Sharapova to face a three-member tribunal, whose members are appointed by the ITF. Haggerty said no date had been fixed for that hearing or the official meeting that would precede it.