NEW YORK (AFP) - Maria Sharapova's Grand Slam comeback after a 15-month doping ban ended in defeat Sunday at the US Open, as did the dream run of Canadian 18-year-old Denis Shapovalov.

Sharapova, whose five Grand Slam titles include the 2006 US Open, made 51 unforced errors to only 14 by Sevastova, whose 21 winners were half the 30-year-old Russian star's total at Arthur Ashe Stadium.

"She played unbelievable throughout the first and second set and I just kept fighting, running for every ball," Sevastova said. "The third set could have gone either way."

Sharapova tested positive for the banned blood booster meldonium at the 2016 Australian Open and only returned from her suspension in April.

She was snubbed for a French Open wildcard, missed Wimbledon with a thigh injury but received a wildcard for the US Open despite only one hardcourt tuneup match due to a left forearm injury.

Sharapova blasted a backhand down-the-line winner to break for a 3-1 edge. Sevastova broke back in the seventh game but Sharapova broke again in the last, taking the first set after 27 minutes with a forehand crosscourt winner. 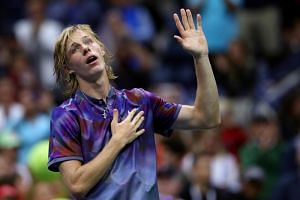 But Sharapova hit a forehand wide to surrender a break to put the Latvian ahead 2-1 in the second set and Sevastova held from there, aided by Sharapova's 16-2 edge in unforced errors in the set.

Sharapova double faulted to hand Sevastova a break to open the final set and the Latvian broke again at love for a 3-0 lead.

Sharapova then had a blistered right middle finger taped by a trainer and immediately broke back and held. But Sevastova held at love, broke again and took the match on a service winner.

"The biggest lesson is that I'm able to compete with these guys," Shapovalov said. "I still think I have a lot of work to do." Stephens, who was a 2013 Australian Open semi-finalist, missed 11 months with a foot injury that required surgery in January and returned only at Wimbledon, but has won 12 of her past 14 matches for her deepest US Open run in six tries.

"I honestly couldn't have asked for a better comeback," Stephens said. "Making it to the quarter-finals here is unbelievable."

Wimbledon and Australian Open runner-up Venus Williams, the US ninth seed seeking her eighth Grand Slam title and third US Open crown, was to meet Spain's Carla Suarez Navarro for a quarter-final spot.

Wimbledon champion Garbine Muguruza, the third seed from Spain and leader in a fight for world number one, also was to face Czech 13th seed Petra Kvitova later. 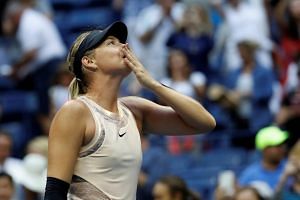 Carreno Busta, the first player in Grand Slam history to face four qualifiers, has not dropped a set at the tournament.

In a draw half assured of producing a first-time Slam finalist, he has a Tuesday quarter-final against either French 16th seed Lucas Pouille or Argentine 29th seed Diego Schwartzman.

Carreno Busta won his third career ATP title in May on Estoril clay then reached his first Slam quarter-final at the French Open, where he retired against Rafael Nadal with an abdominal injury that kept him out of Wimbledon.

"At the beginning I was a little bit discouraged, maybe nervous," Carreno Busta said. "In the tie-breaks I just played perfect. It was an amazing victory for me."